This year we’re excited to present a brand new tour, Titanic Graves of Woodlawn Cemetery, led by Titanic tour guide Dave Gardner. We sat down for a Q&A with Dave to get inside the head of this city’s foremost expert on the Ship of Dreams, who may or may not wear his Captain’s hat for you if you take his tour. (You can buy tickets here.) 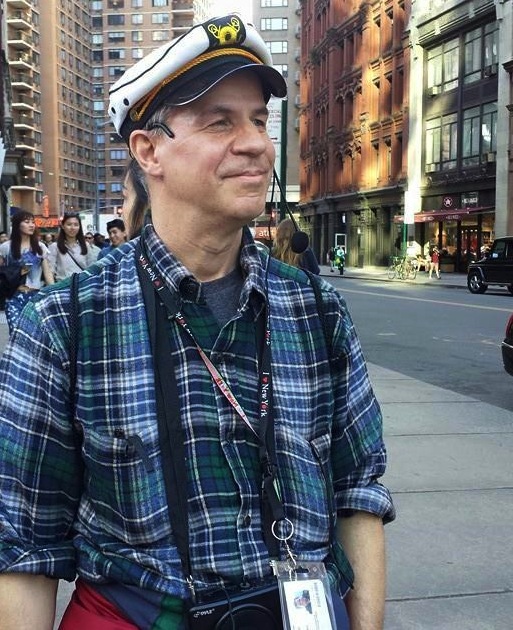 How did your obsession with all things Titanic begin?

My enthusiasm for Titanic started in our Tour Guide Association.  As a general New York City Tour Guide, the vessel was just one more facet of New York history. Before this, I went to the Titanic Exhibition (the traveling artifact show) and, of course, saw the James Cameron epic motion picture, but not much else besides the basics. More and more associates of mine were becoming involved in different ways and aiding the Guides’ association; I had not, so in searching for a niche, I selected the presence of Titanica in New York City.  After being reassured that nobody in recent memory had done this (likely nobody EVER on behalf of the group), I staged my first tour.  Simply in doing follow-up on research, I’ve been pursuing her since,

People don’t often think of New York when they think of Titanic. What do you think is important about the connection between Titanic and NYC?

My research in New York City is deeper than the sea. The more buildings and churches I photograph that had the footprints of Titanic passengers, the more fruitful the connections become. My tour is very oriented with connections.

What is your favorite Titanic story? NYC or otherwise.

My favorite story could perhaps be the wild tale of the Titanic passengers buried the furthest west (both who died on the ship); the Hickman Brothers. Lewis Hickman and his brothers were to be buried in Eden, Neepawa, Winnipeg. A recovered body was being sent to the town and the locals were told that it was identified to be Leonard. The casket was slow on delivery and all arrangements were made to inter Leonard, but right before the ceremony, the body was found to be that of his brother, Lewis. To not disrupt anything further, it was decided to close the casket, bury Lewis as Leonard, and have it be done with. It was over for a while but a confidante spoke too loudly and word got back to their families who regarded the impromptu decision negatively. Since there was also a third brother in the same plot, it was all simply named for “the Hickmans”.

What is the one myth you would love people to stop believing about Titanic?

There are several.  The oldest myth that has had plenty of time to aggravate historians is the Switch Theory, a favorite villain.  People have theorized that since RMS Olympic, the original sister ship to Titanic, was damaged, that to collect insurance, she was masqueraded as Titanic and deliberately sunk. Of course, the notion of intentionally ramming an iceberg in the sea is as absurd as they come.

The brightest burning myth, however, is the present current farce regarding the coal bunker fire theory. This postulation that photographic smudges on the outside of titanic are evidence of a “raging coal fire”, has been debunked almost immediately, one motion was to point out that other photos from the same hour bear no such smudge.

What is your favorite NYC-specific Titanic landmark?

The Titanic landmark closest to me is the Arch at the former Pier 54. This is one of the few physical links we have towards the story and it’s easily photographed so I visit it the most often.

I am also fond of the statue of “Memnosyne” in Straus Park but perhaps my current favorite is the recently restored Wireless Telegraph Operators Memorial in Battery Park. Prominently mentioned on it is Jack Phillips who died on “SS Titanic”

Where do you stand on the Titanic movie? Twenty years later, does it still hold up?

Sometimes knowing the “why” can help to understand the “how”. James Cameron had several dilemmas and solved them all brilliantly, I think. A common detraction made by the fastidious is that Jack-and-Rose aren’t real and thus corrupt the true story of the sinking. This is an easy impulse to have but one has to understand that one would not be in the theatre to watch a true story, in this case. A blow-by-blow account could have been fairly nice but no one person traveled extensively over the ship, not even the crew members. One could take a real character and send them on a romp all over but then you’re directly desecrating history. The solution was to introduce totally fictional characters and give them the run of the vessel.

Is there anything else you want us to know about you or your tours?

It has been, and might still be, an easy assumption to figure that the story of Titanic ended when the pieces of her wreck crashed to the bottom of the Atlantic but I can assure you that the story is alive and well.

There is STILL new information being revealed, there are still artifacts to be seen, and there are still stories to be told. There are more Titanic museums opening, one in Canada.  There is a landlocked replica of the ship that will be constructed in China, a failed attempt to build a seagoing replica drew worldwide attention, and more hotels and clubs are offering Titanic brunches and dinners, Edwardian Dress and all.

I am the only person n New York City who stages a Titanic Graves Tour in Woodlawn Cememtery. Why?  Because there are stories to be told.

Learn more about the Titanic passengers who rest at Woodlawn Cemetery with Titanic Tour Guide Dave Gardner this April.