Poe and Lovecraft: The Weird in New York City

Boroughs of the Dead’s tour The Weird West Village: From Poe to Lovecraft focuses on the ghostly, uncanny, and weird side of the city on this tour that highlights the works of two great masters of the macabre. Tickets available here.

Quick: what comes to mind when I say the word “weird”? The uncanny? The eerie, odd, and inexplicable? “Weird” is all of these things — the ghostly and strange and subtly disturbing. Edgar Allan Poe and H.P. Lovecraft were masters of the literary weird, icons in the world of unsettling literature. By a (weird?) coincidence, they both lived in New York City during crucial stages in their careers, and signs of both of them can still be found in the city.

There are two extant structures at nearly opposite ends of the city that you can visit if you’re a fan of either of these writers: 169 Clinton Street in Brooklyn is the well-known former residence of H.P. Lovecraft (and recently sold for three million dollars) and Poe’s Bronx home still stands, although in a much busier thoroughfare than the Valentine cottage of the 1840s (and in a slightly different location from the original).

But if you want to explore the worlds of both of these writers in one afternoon, the best place to do so is actually in the West Village. 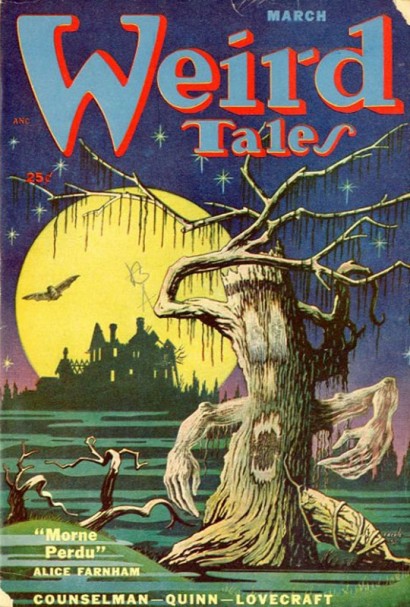 Although Lovecraft resided in Brooklyn, he ranged far and wide in his explorations of the city, spending long nights walking in the Village until dawn, and even venturing as far afield as Staten Island on his rambles. Greenwich Village’s “cryptical” winding streets found their way into Lovecraft’s short story, He (1925). Though the following lines are technically fiction, it isn’t hard to hear the authorial voice in them:

“The archaic lanes and houses and unexpected bits of square and court had indeed delighted me, and when I found the poets and artists to be loud-voiced pretenders whose quaintness is tinsel and whose lives are a denial of all that pure beauty which is poetry and art, I stayed on for love of these venerable things. I fancied them as they were in their prime, when Greenwich was a placid village not yet engulfed by the town; and in the hours before dawn, when all the revelers had slunk away, I used to wander alone among their cryptical windings and brood upon the curious arcana which generations must have deposited there. This kept my soul alive, and gave me a few of those dreams and visions for which the poet far within me cried out.”

This is fairly typical of Lovecraft’s reaction to New York City. He nostalgized compulsively, and tried to drown out his bitter unhappiness by slipping away in his mind to other parts of the city that recalled to him other places, other times. To return to his Staten Island jaunt, for example, he seemed to enjoy visiting the Conference House, “embowered among antique pines on the south shore and now in a state of vast decrepitude, a stone pile built by the first British circumnavigator of the island about 1664.”

And, like every other human being with a beating heart, he was moved by his return trip on the ferry:

“Twilight fell on the ferry trip back to New York, and I the lights come out one by one in the skyscrapers which make of Manhattan a thing of Dunsanian beauty.”

It is significant that he should invoke Dunsany here, whose Book of Wonder begins, “Come with me, ladies and gentlemen who are in any wise weary of London: come with me: and those that tire at all of the world we know: for we have new worlds here.” Lovecraft, in his tortured relationship with New York City, seemed always to be looking for new, imaginary worlds within it. 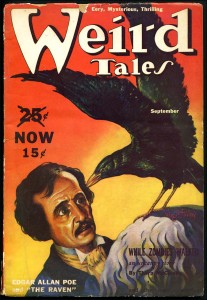 Poe, by contrast, was much more involved in the world around him, socializing, bickering, mixing it up and generally heading full on into the fray. His time in Greenwich Village has been pretty well documented on this site, and I even offer a tour devoted exclusively to his time in the neighborhood (the next edition runs on August 15th, Virginia’s birthday). He has left a scattering of visitable sites in the Village, and the fun lies in imagining them in the context of his work — imagining Marie Roget in a former cemetery on the banks of the Hudson River, contemplating Amontillado‘s treachery amid the site of his most ruinous social betrayals — in other words, contemplating the weird in a setting that is somehow inherently uncanny.

For the West Village, you see, lends itself to bizarre imaginings. Its streets are unsettlingly labyrinthine, its homes ancient and stately, and its histories strange glimmers of a past that was sometimes shockingly bizarre. It is, in other words, the perfect place to savor the intersection of weird fact and fiction, on a late-night ramble through its “cryptical windings.” And so I’ve put together a tour that combines all of these elements, from the obscure and grotesque histories of Washington Square, to the tales of ghosts and murders that seem to spring up like toadstools in this part of town, to Mesmerists, Masons, occultists, and the odd wandering corpse thrown in for good measure. It should amuse fans of Poe and Lovecraft, or anyone interested in the unknown, the odd, and the dark side of history… and, of course, the Weird.