Ghosts of the Sea 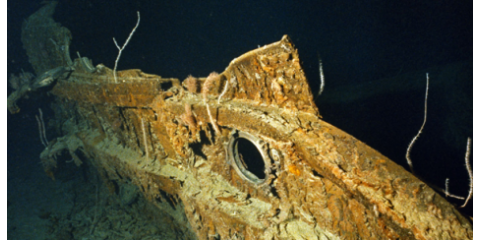 When April comes, I begin to think of the Titanic. The tragic maritime disaster with its ghostly whiff of unfinished business, why, it just inflames my imagination, let me tell you. And living in New York City, we have something of a special claim to the story — along with Belfast, Southampton, and Halifax, New York is one of the cities most associated with the craft.

Our city has its share of Titanic memorials – the lighthouse at the South Street Seaport, and a touching memorial to Ida and Isidor Strauss on 106th Street – as well as some of its ghosts. Most famously, the Jane Street hotel is rumored to be haunted by the spirits of the ship’s survivors. But what of the site of the sinking? Can the sea itself be haunted?

This is an interesting question for ghost-hunters. The ocean is filled with wrecks and the bodies of doomed sailors and passengers. With so many ghosts of the sea, the earth’s waters should be one of the most haunted places in existence. Think of all the perished souls who died abruptly and violently and never had a proper burial – supposedly the first set of criteria for creating ghosts. Logically speaking, there ought to be dozens of ghost ships circumnavigating the seas at any given time.

And there are indeed very many famous ghost ships. The Flying Dutchman, of course, is the best known. The Dutchman legend has been floating around (if you will) since the 17th century. The ship is said to be doomed never to enter port and to sail ‘round the world forever. To sight its glowing hull and masts is said to portend doom, and those who see it will never walk ashore again. The origins of the story are unclear, but some have tried to explain it scientifically, saying it’s an optical illusion caused by light refraction, which may be how the legend began. However the story first got started, it has been repeated throughout the centuries, and has been adapted in literature and film, most notably in Coleridge’s Rime of the Ancient Mariner, which tells tale of a ghost ship, and in Edgar Allan Poe’s MS. Found in a Bottle, in which a shipwreck survivor finds himself on a ship with a lifeless crew.

As for the Titanic itself, have there been any ghost sightings spotted near the rusting hull, three hundred miles out to sea? Incredibly, the answer is yes. Ships passing by the site, which is off the coast of Newfoundland, have actually reported seeing orbs. Orbs, as any ghost hunter can tell you, are little balls of light-energy signifying supernatural presence. Multiple orbs have been spotted hovering near the Titanic site, on more than one occasion. Furthermore, submarines sailing near the site have reported hearing strange signals and interference on their radios, including SOS messages that have no verifiable source. (On an interesting side note, the Titanic was among the first vessels to use the distress signal SOS, which was new at the time. It used it interchangeably with CQD – come quick, danger – which was the old signal. Neither, of course, helped matters.) Finally, in 1977, Second Office Leonard Bishop of the SS Winterhaven gave one of his passengers a tour of his ship. The passenger was soft-spoken, had a British accent, and was unusually attentive to detail. Something about the man struck Bishop as odd, but he couldn’t quite put his finger on what seemed out of place. A few years later, someone showed him a picture of Captain Edward J. Smith, and Bishop said, “I know that man, I gave him a tour of my boat.” His companion laughed and said, “Impossible! That man was the captain of the Titanic.”

Want more maritime ghost stories? Check out our tour Ghosts of the Titanic.