This is a decidedly non-New York post, but lately I’ve been thinking about some of my favorite (fictional) ghost stories, and I realized that some of them aren’t even ghost stories at all. They’re just strange, and eerie, and unsettling, and if you ever get a chance to hunt them do, by all means do. One of my particular favorites is about a man with an uncanny ability… and a talent for cutting hair. 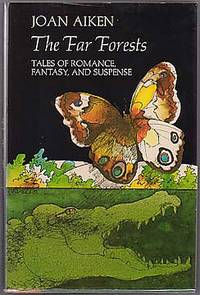 Joan Aiken’s “As Gay As Cheese” from The Far Forests: Tales of Romance, Fantasy, and Suspense (1977), concerns a Cornish barber named Mr. Pol who has the uncanny ability to foretell a person’s death merely by running his hands through their hair. He rents the room above his rickety shop to a surly artist who panders to the tourist trade with seascape watercolors. Mr. Pol is an untroubled, fatalistic soul, the very embodiment of equanimity, accepting his strange gift as just one of those things. He whistles cheerfully and speaks in homely cliches as he cuts hair, sweeps floors, and putters around the shop: “I’m as bright as a pearl this morning,” he’ll say, or, “I’m as gay as cheese today.”

One morning a young couple, summer visitors, comes into the shop. Brian is an emotionally abusive bastard who strides in demanding a shave while ordering Mr. Pol to give Fanny a haircut (“You look like a Scotch terrier,” he says to her); Fanny is a scared and gentle fawn of a woman. Throughout, Brian is very anxious to take a certain cliff walk to Pengelly. In fact, he seems extremely focused on this.

As Mr. Pol cuts Fanny’s hair, he feels a shudder run through him like an electric shock… and I can’t say much more.

Without giving it away, I can tell you that the story ends with the surly artist running downstairs too late to sell a painting to Brian and Fanny. He notices Mr. Pol’s pallid face as the barber stares after the departing couple. “What’s the matter?” he asks. “Nothing,” Mr. Pol says. “I’m as gay as cheese.”

I love this story because it says so much while stating so little. With only a few comments and pointed insults, we are given full understanding of Brian’s character; Fanny’s frightened reactions sketch in the rest.

We are given two layers of terror here: that of poor frightened Fanny/violent Brian — the violent spouse trope effectively used in horror stories as varied as The Shining and Bluebeard — and that of Mr. Pol, who can only watch, but cannot act. For Mr. Pol knows he is powerless to stop what happens; his powers do not grant him the right to intervene, and he must quietly let life — and death — run its course, as a river runs to the sea.