There’s nothing more insulting than a listicle blaring “TEN THINGS YOU DON’T KNOW ABOUT X!” (especially when you read the damn thing and discover you knew them all) so I won’t presume that the following will be news to everybody. Still, in some of my recent research I’ve come across a few fun facts about Poe … well, mostly fun, anyway… that I thought were worth sharing. And of course I’ll talk about these and more on this Friday’s Unlucky Thirteen with Edgar Allan Poe tour 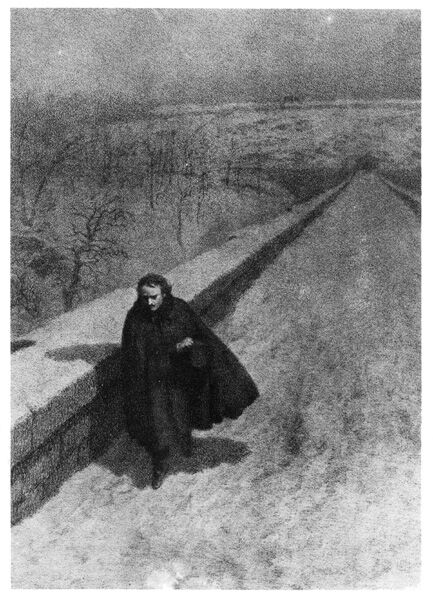 Poe was a big fan of the long walk. He took many solitary strolls over High Bridge in the Bronx in 1847, after his wife Virginia died. There, staring up at the stars, he would conceive his lengthy cosmic prose poem, Eureka. But he also liked rowing and swimming: as a young lad, he was renowned among his friends for swimming six miles upriver in the Charles River in Virginia, and when he moved to New York City (for the second time) in 1844, one of his first acts was to row a skiff up the East River, all the way up past Roosevelt Island. He would remark on the beauty of the “antique frame houses” clinging to the cliffs overlooking the river, and lament the fact that in “some thirty years, every noble cliff will be a pier, and the whole island will be densely desecrated by buildings of brick, with portentous facades of brown-stone, or brown-stonn, as the Gothamites have it.”

2) He had great handwriting 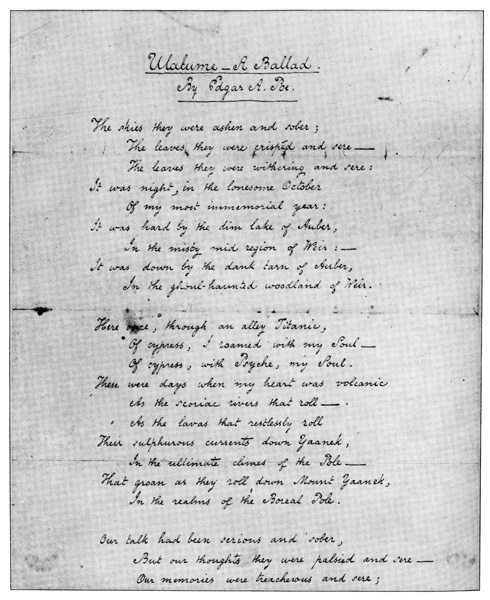 Fair copy of Ulalume in Poe’s own handwriting

One thing that really impressed me this past fall when I went to the Morgan Library exhibit “Terror of the Soul,” was the general gorgeousness of Poe’s handwriting. Staring at fair copy manuscripts in the poet’s own hand, I was astonished by the clarity and delicacy of his penmanship. The man did indeed have a lovely script (a cool signature, too) and not just when officially submitting stories and poems for publication: even his casual letters look better than most hand-lettered wedding invitations nowadays. 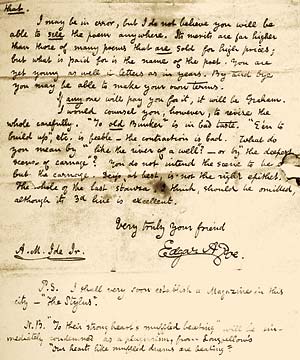 3) He liked to decorate

Poe published a “Philosophy of Furniture” in Burton’s magazine in 1840. A largely tongue-in-cheek piece that was likely one of the many hack writing assignments he undertook on a regular basis to fill the pages of the magazine, the Philosophy seems to be a clever writer’s way of dealing with a dull assignment. Poe ruminates on the poetics of picture placement and passes judgment on the invariable garishness of Yankee taste. Chandeliers and gas lighting are, for example, “the quintessence of all that is false in taste or preposterous in folly.” 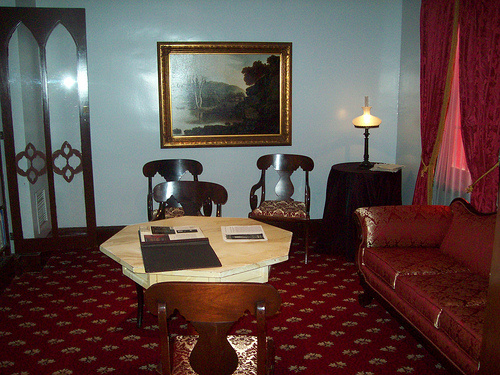 It’s possible, however, that Poe did have a genuine interest in home furnishings. Family friend Marie Louise Shew “once asked Poe to assist her uncle in selecting furniture for a new house she had taken. She remarks: “I gave him carte blanche to furnish the music-room and library as he pleased. I had hung the pictures myself,… placing over the piano a large painting by Albano. Poe admired it for hours, and never tired of gazing upon it….'”

4) He was crotchety about street noise

Poe lived in many cities, but in 1844, when he was living in NYC and published Doings of Gotham, Poe would really show himself to be a New Yorker at heart: he complained about street noise. 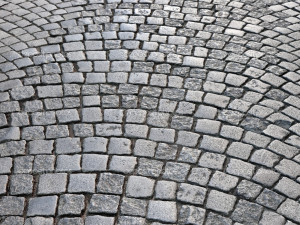 “The din of the vehicles… is even more thoroughly, and more intolerably a nuisance. Are we never to have done with these unmeaning round stones? — than which a more ingenious contrivance for driving men mad through sheer noise, was undoubtedly never invented. It is difficult to foresee what mode of street-pavement will come, finally, into vogue; but we should have some change, and that forthwith, or we must have new and more plentiful remedies for headache.”

He published these words on June 12th, 1844. As I sit here writing this on June 9th, 2014, I am convinced that Poe would have had some choice words for the maddening repetitive refrain of the Mister Softee truck.

5) He didn’t get along with his sister 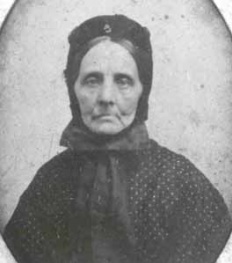 Poe had two siblings: an older brother named William Henry Poe, and a little sister named Rosalie. The three Poe siblings were split up into different foster families after the death of their mother Elizabeth in 1811, and Rosalie went to live with the Mackenzie family in Richmond. While Poe’s relationship with his brother was somewhat distant — understandable, given that they’d been raised apart — they were at least on speaking terms in their adult years. How amicable their relationship was is hard to gauge, but they would spend time together in Baltimore and probably grew close — Poe would even take on some of Henry’s debts, which he could ill afford, near the end of his life (Henry died in 1831, of tuberculosis).

Poe’s relationship with his sister Rosalie was much stranger.

He seemed somewhat disgusted by his little sister, who was dull and unattractive, and never developed mentally past the the age of about a ten-year-old:

“Edgar developed into a brilliant youth, as much noted for physical beauty, strength and activity, as for intellect and genius. Rosalie, as though some mysterious blight had fallen upon her, gradually drooped and faded into a languid, dull and uninteresting girlhood — apathetic in disposition and weak in body and mind… Her eyes, dark gray, like those wonderful spiritual ones of her brother, were weak, dull and expressive only of utter vacuity. She was accustomed to sit for long intervals gazing upon vacancy, and when aroused, would answer to an inquiry: “ I wasn’t thinking at all; I was asleep with my eyes open.” She had an invincible dislike of any mental or physical exertion; and Miss Mackenzie was accustomed to state, as a remarkable fact, that after, as a child, progressing rapidly in her studies to a certain point, she at the age of eight or ten ceased absolutely to make farther progress, and at that point remained during her life.”

It is also possible that Rosalie was only Poe’s half-sister, because his father had already kind of disappeared from the scene by the time his mother became pregnant with her. It’s unclear how Poe could (or if he did) know that, and there is no evidence to prove anything one way or another, so we can’t really take that as a reason for his dislike of Rosalie. Still, one can imagine Poe, who valued beauty and intelligence so highly, shrinking away from any intimacy with this dull and pathetic sister.

Okay, that last fact wasn’t really fun at all.

So here’s one final sort-of fun, sort-of fact that I won’t include in the official list because it’s really just more of an observation — but

6) Poe was pretty obsessed with water

From the tomb by the sounding sea in Annabel Lee, to the torrent, fountain and common spring in Alone, and the sea in the City in the Sea; from descents into maelstroms, manuscripts found in bottles, to sailors of Nantucket, water imagery abounds in Poe’s work. Maybe I’m reaching here — for every example I list, there are ten more that have nothing at all to do with the water. Surely this is some sort of selection bias on my part. Nonetheless, water seems appropriate imagery for a man who was often deluged with disaster, and sometimes drowned his sorrows, no? Maybe?

Even if this seems like a stretch to you, indulge me for a bit with one final image:

In 1815, when Poe was a little lad of six, he made his first ocean crossing with John and Frances Allan, when the family was on their way to live in England. On September 21st, John Allan wrote a letter to a friend, outlining their trip across the Atlantic. In it he relays a message from Edgar, who proudly makes a note of the following: “Edgar says Pa say something for me say I was not afraid coming across the Sea.”

I can’t help reading something into that: these are the words of a soul at home on the water, unafraid of the depths, and in love with the musical rhythm of the waves.