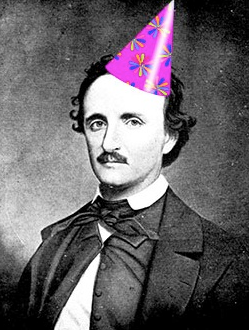 On Sunday, January 22nd, 2017, join us for our fourth annual Edgar Allan Poe In Greenwich Village tour, a two-hour literary and historical walking tour that steps into the Greenwich Village of the 1840s, where Poe lived and worked at the height of his fame — before plunging irrevocably into the final, abysmal chapter of his short life. As we do every January on (or around) Poe’s birthday, we are celebrating Poe’s life, work, and time in Greenwich Village to keep his important connection to Manhattan’s history alive and remembered. We think he’d appreciate the party hat, too.

TOUR LED BY OUR FOUNDER — PLUS TRIVIA AND PRIZES!

Edgar Allan Poe In Greenwich Village is led by Poe fan and macabre fiction writer Andrea Janes. Andrea is also the owner and founder of Boroughs of the Dead. This is one of the few tours she leads personally. As always, Andrea will offer Poe trivia — and prizes! — between stops on the tour.