Today is the 111th anniversary of one of New York’s biggest disasters in terms of loss of life. In fact, before September 11th, it was the biggest disaster for New York City but it seems few people have heard of it.

On June 15th, 1904, 1,342 people (the numbers vary according to what you read but somewhere between 1,300 – 1,400) boarded the passenger steamboat the PS General Slocum. The steamboat had been chartered by St. Mark’s Evangelical Lutheran Church in the Little Germany district of the East Village, mostly huddled around St. Mark’s Place. The passengers mostly consisted of women and children, as it was a Wednesday and fathers were at work. It was a glorious, sunny day when they set sail at 9:30 am, bound for their annual festive picnic in Eatons Neck, Long Island. A band played German church hymns as they sailed up the East River and towards an area known as the Hell Gate (Anglicized from the Dutch “Hella gut” meaning “bright passage). The Hell Gate is also known for its choppy waters. Astoria residents will recognize it as the strip of water by Astoria Park and the Hell Gate Bridge which was built a little later in 1916. 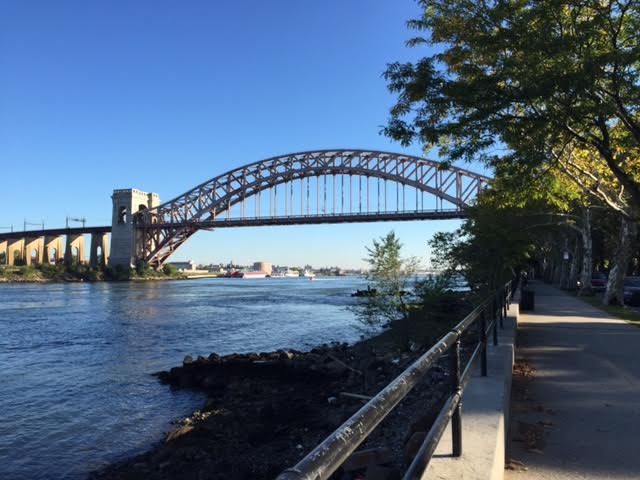 Around 10 am, someone spotted a fire in the lamp room. A 12-year-old boy tried to notify the captain but the boy was instantly dismissed. Workers from the Knickerbocker company, who were poorly trained and poorly paid, tried to put out the fire, throwing charcoal on it, but to no avail. They ran off to get hoses, leaving the door open, further fueling the fire. It was then discovered that both fire hoses were broken. The steamboat company had been very sloppy about safety checks, and this was a day in history, that would change safety checks on passenger boats. Realizing that their efforts to put out the fire were useless, the crew began urging passengers onto lifeboats which were tied up and inaccessible. Desperate mothers began putting life preservers on their children and throwing them overboard, as the fire began to consume the forward part of the boat which became a mass of flames within seconds. The life preservers, however, were old and made out of cork, and had lost their buoyancy. Some life preservers simply fell apart in people’s hands or, those thrown overboard would simply sink to the bottom.

As babies shrieked with pain and clothes caught fire, Captain Van Schaick, put the boat into full speed, heading for North Brother Island. The boat’s increase in speed further fanned the flames. Moreover, later investigations would find that North Brother Island could not have been a worse place for landing the steamboat. The water was deep and there was no beach. Just as the vessel struck the rocks the supports of the hurricane deck burned away, and with a crash the upper works came down. The vessel was then completely enveloped in flames. As the boat struck land, hundreds jumped or were thrown into the water, and hundreds more were precipitated into the blazing furnace beneath. These remain, a charred, unrecognizable mass, in the hulk of the burned vessel, which is now beached at Hunt’s Point, more than a mile from where it first struck.

A dozen tugboats, two fireboats, a police boat, and more than a hundred other vessels joined in the rescue effort. Some of the rescue ships themselves caught fire while trying to get people off the General Slocum. In fifteen minutes, the Slocum had burned to the waterline.

The estimated death count for this disaster was 1,021, that’s over 75% of the passenger crew. This was a major tragedy for the Kleine Deutschland community in the East Village, and some historians would claim that this is the incident that commenced the decline of this community.

The tragedy is memorized in a fountain in Tompkins Square Park and there is now an information board in Astoria Park. Every year, a ceremony is held at the fountain to honor the victims.

Marie Carter is the creator of our “Haunting Histories and Legends of Astoria” tour, which shares the history of the Hell Gate and more. The next tour will run on June 27, 2015.