Now that the new Fox show is bringing renewed attention to Sleepy Hollow, I figure it’s time to sift through the fact and fiction of the tiny hamlet immortalized in Washington Irving’s legendary tale. I trekked up to the real Sleepy Hollow, and this is what I found.

In the TV show, there are a lot of high angle shots of the town, including several of the famous churchyard of the Old Dutch Church. One scene in the pilot episode even takes place in a churchyard, though it clearly isn’t this one. (Fair enough; I wouldn’t let a film crew on the fragile grounds either.) The real church itself is beautiful; you can easily imagine the secrets and sights absorbed into its worn stones. The church was built in 1687, making it one of the country’s oldest houses of worship in continuous use. 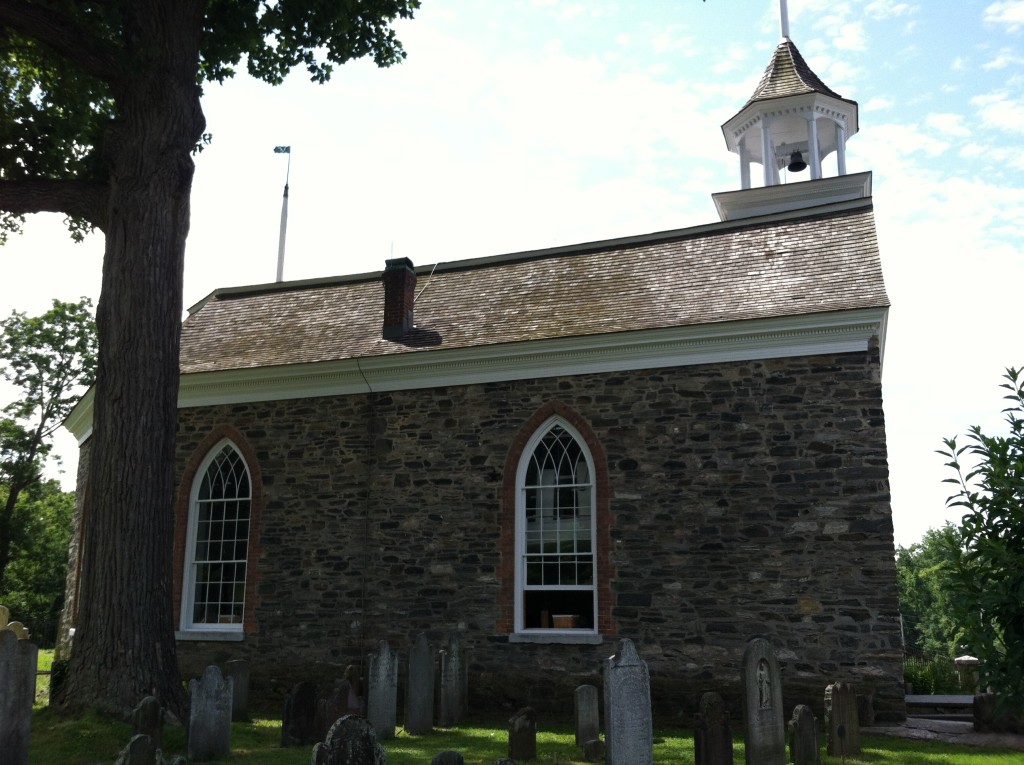 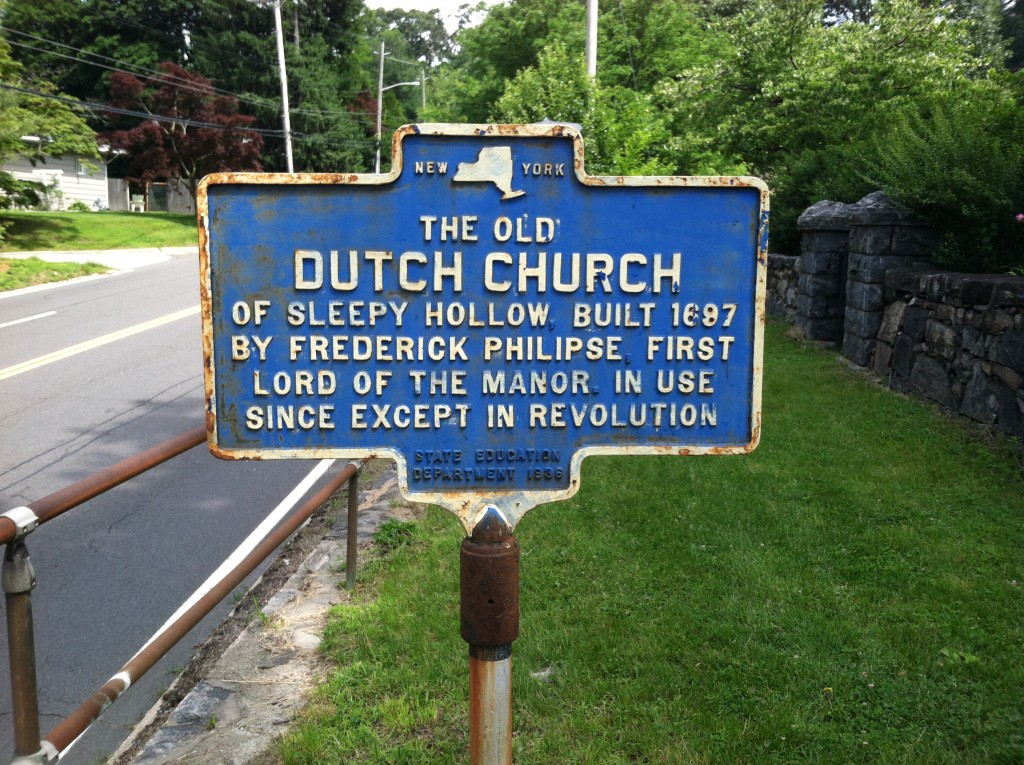 The old burial ground is rich with delights, especially the incredible gravestones. In the TV show, Ichabod Crane finds the gravestone of his departed wife, who was burned for witchcraft. The tombstones in the real cemetery are beautifully creepy enough in their own ways. 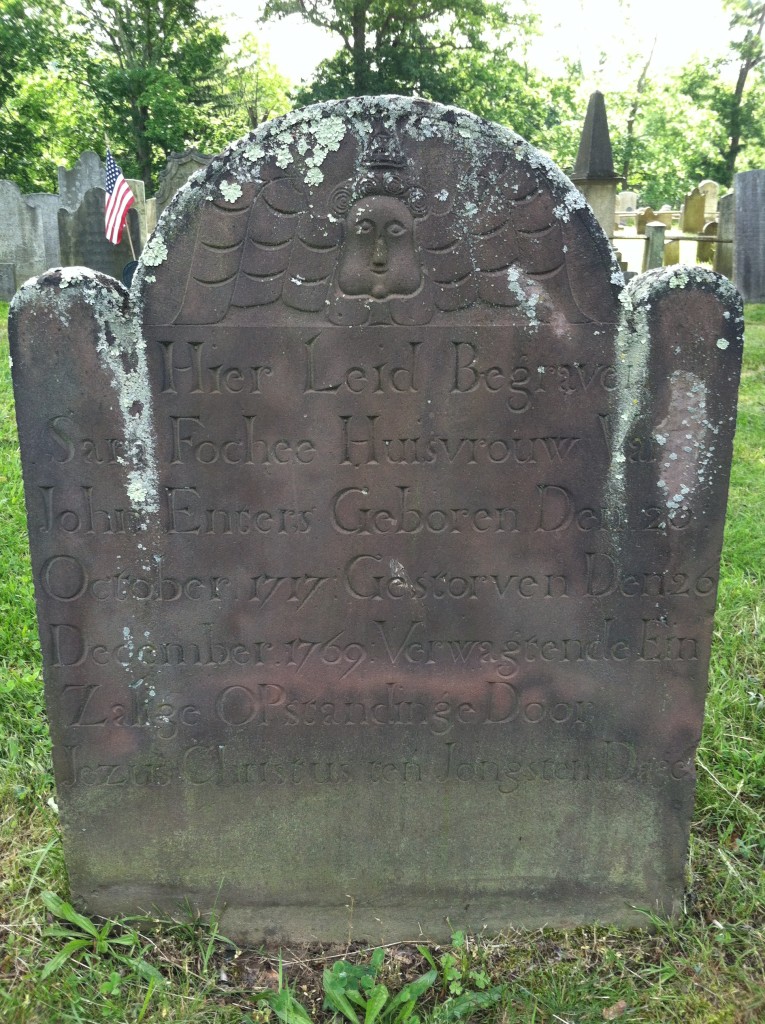 I’m pretty sure the first three words carved onto this stone are “Here Lied Begraven.” The text is in Dutch, which is thrilling enough (they spell Jesus with Z!) but I have to say the word “begraven” is kind of amazing. I’d like to start using this word all the time. I’m fairly sure the grave belongs to a woman (“huisvrouw,” if I’ve been reading my Knickerbocker correctly, means “housewife” or “wife”) but the only name that appears is that of a man (John Emers). Is it possible this goodly vrouw is identified only by her husband’s name? Dutch people, help me out on this one. The good woman died in 1769, and her headstone is wonderfully representative of the preferred colonial style: its shoulder arches and tympanum are classic colonial, and the winged death’s-head reflects the cheerier, more cherubic design used at the time, which supplanted the grim, skeletal carvings preferred in the earlier part of the century. A lovely headstone. 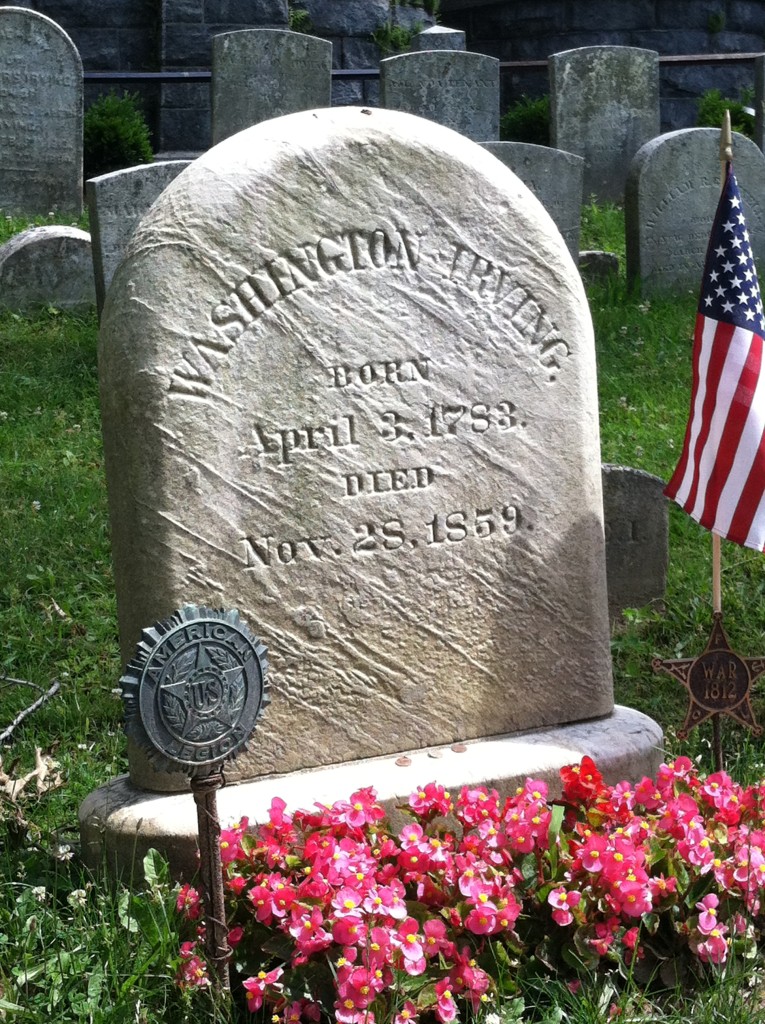 A few steps away lies the grave of the author himself: Washington Irving. Irving wrote a number of wonderful spectral tales in addition to the two everybody knows, as well as history, biography and satire, plus he pretty much single-handedly saved Christmas. And, he was a marketing genius. Prior to publishing his History of New-York, which he released under the pseudonym “Diedrich Knickerbocker,” Irving plastered New York City with posters declaiming the august historian Knickerbocker “missing,” and asking all citizens to come forward with any news of him, should they find him. Irving even took out ad space in various newspapers. Naturally, the city was astir with curiosity, and when “Knickerbocker’s” book finally came out a few weeks later, New Yorkers beat down the doors to get their hands on a copy. A bestseller was born, and Washington Irving accidentally invented viral marketing two centuries before such a thing existed. Take note, Fox execs! 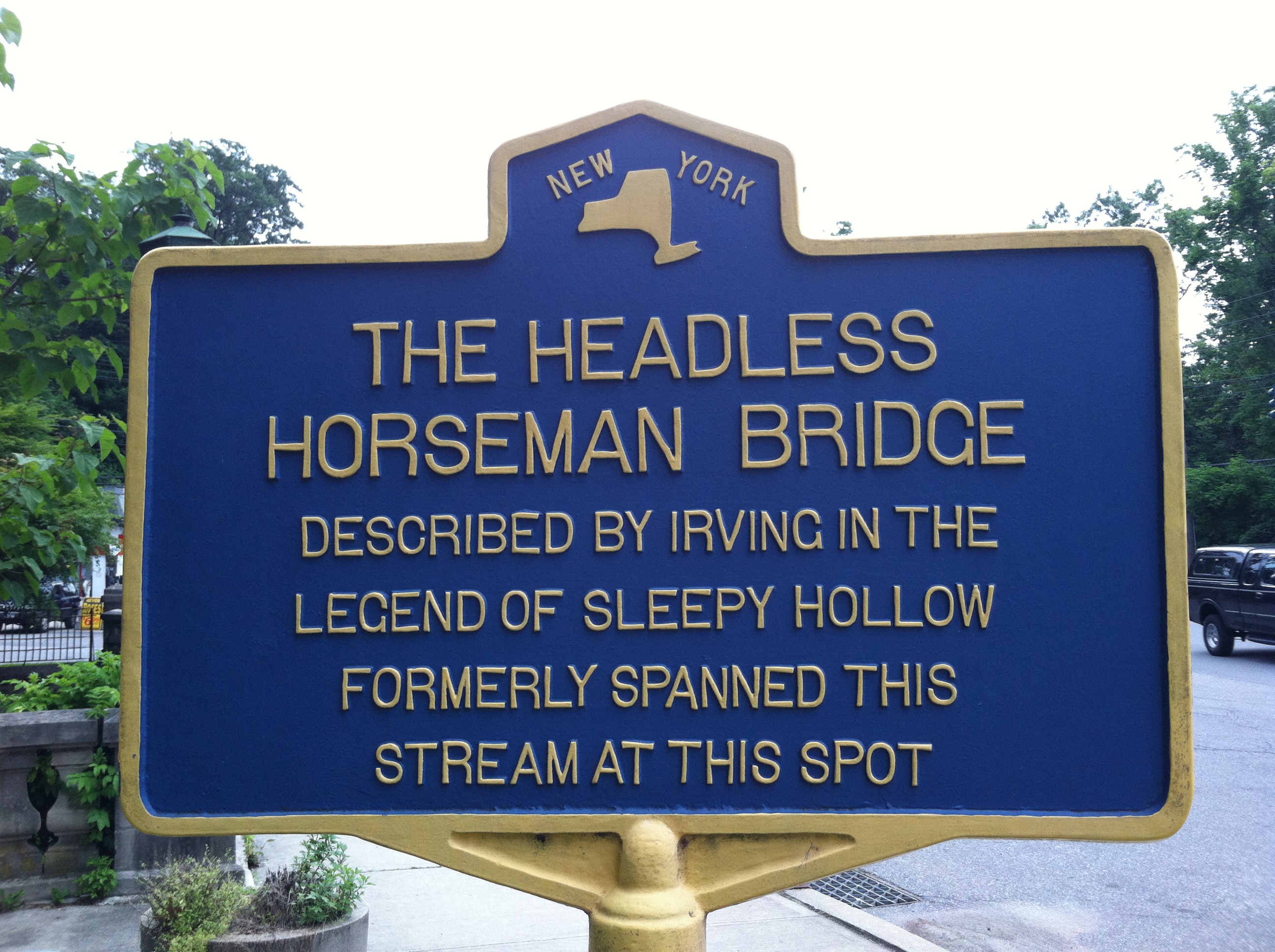 But of course Irving’s masterwork was his Legend of Sleepy Hollow, and you can even see the bridge supposedly referenced in the story. The bridge is just outside the churchyard gates, and on the day we visited, two volunteers had set up merchandise tables there. As I seriously pondered buying a pewter Headless Horseman Christmas tree ornament, the older gentleman volunteer began speaking passionately about how much he loved the churchyard, and Irving, and the stories. He quoted some lines from Sleepy Hollow to us:

An opening in the trees now cheered him with the hopes that the church bridge was at hand. The wavering reflection of a silver star in the bosom of the brook told him that he was not mistaken… “If I can but reach that bridge,” thought Ichabod, “I am safe.”

He looked at us intently and said, “That line always makes my hair stand up.” 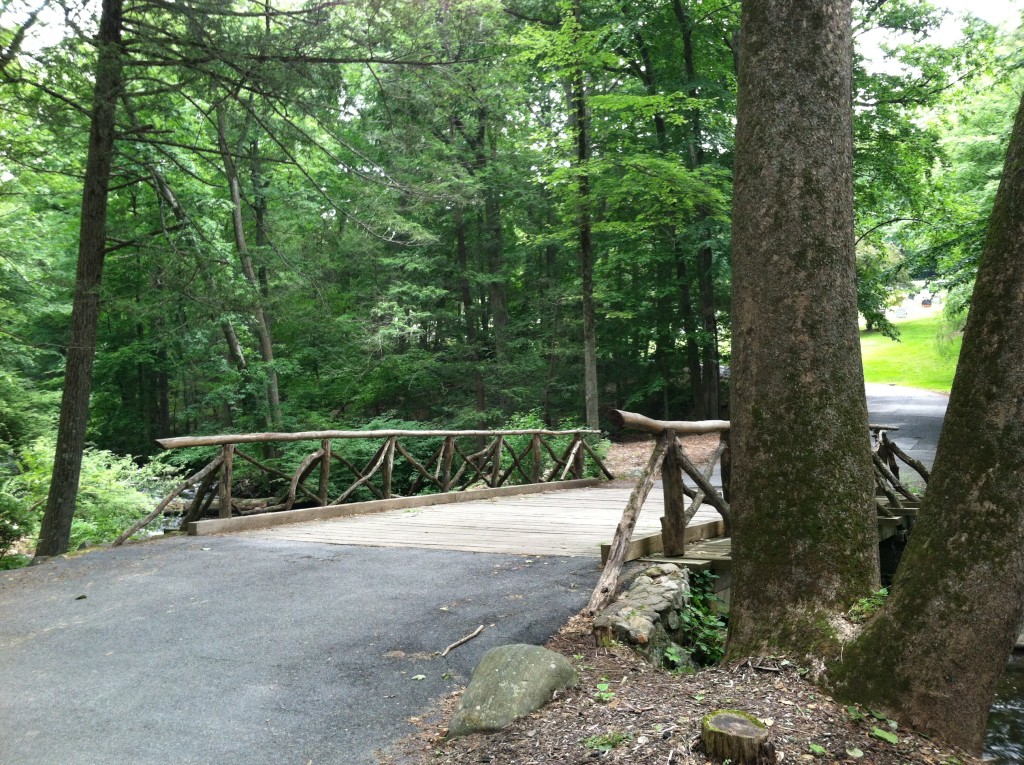 A re-creation of the bridge, inside Sleepy Hollow Cemetery.

It was amazing. This guy was an even bigger Washington Irving fan than I was. I thanked him warmly and, brimming with inspiration, set off to visit Sunnyside.

Sunnyside was designed by Irving himself, and the cottage reflects the writer’s expansive and wide-ranging interests. It has all the architectural cohesion of a minor explosion, and is curiously charming. 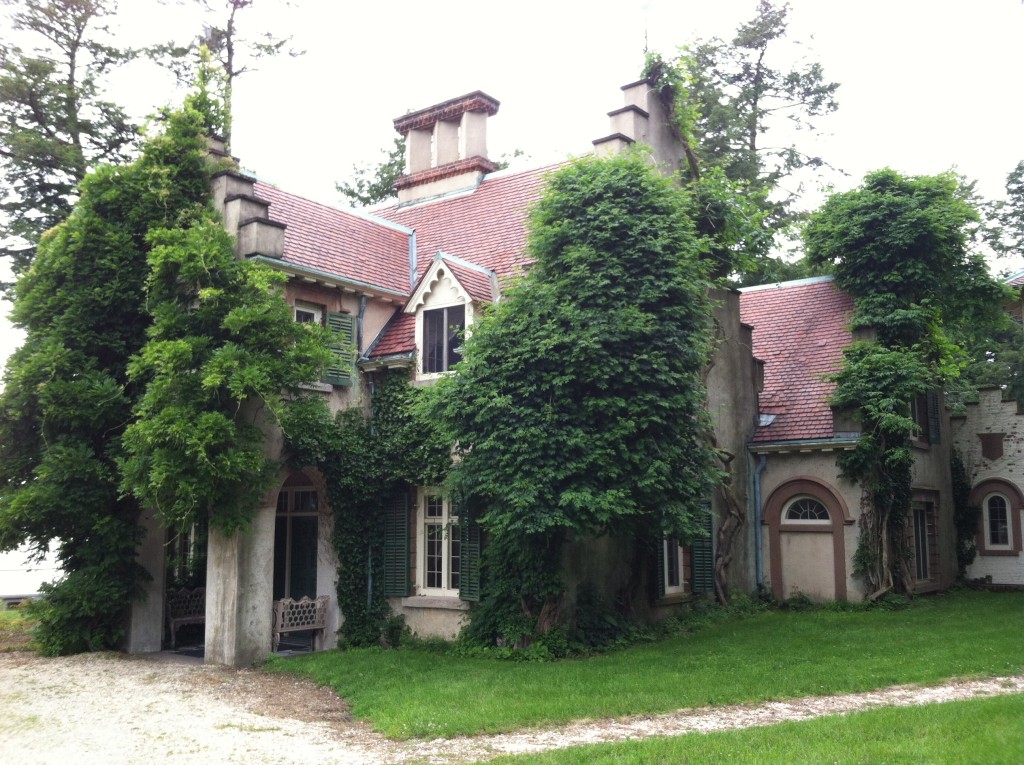 Irving of course had to throw in a few inauthentic faux-Dutch touches, like this date, affixed to the western wall of the cottage: 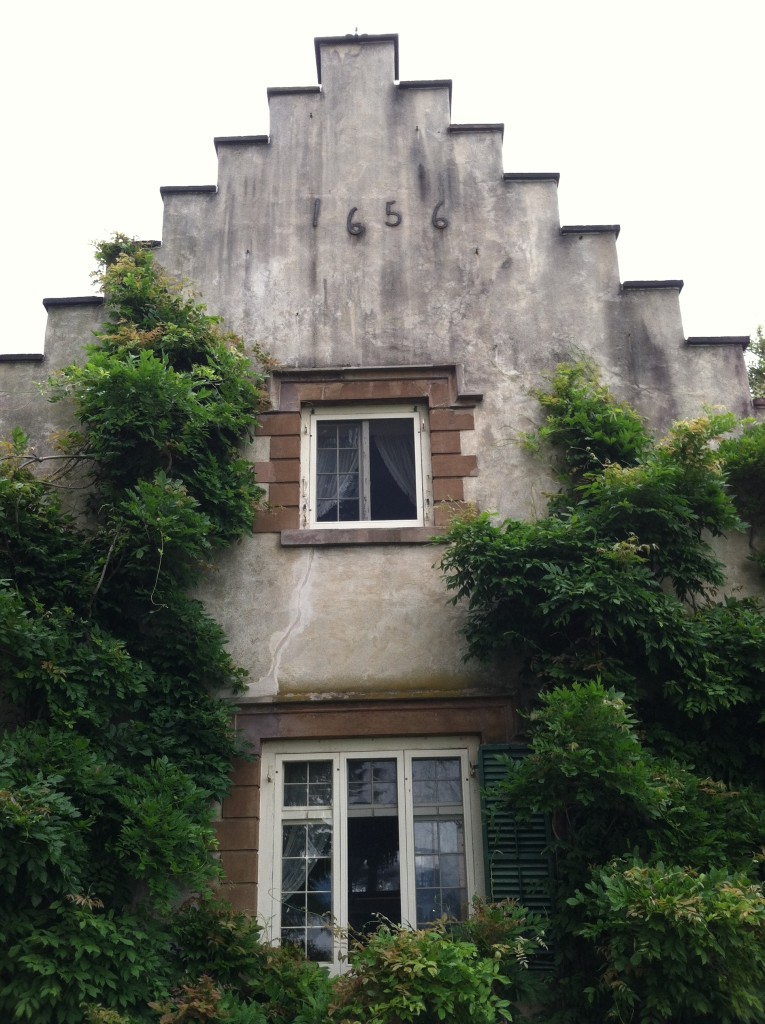 This house was actually built in the 1830s.

The funny thing is, no one is really sure what the “1656” refers to. Obviously it doesn’t reflect the date Sunnyside was built, since Irving bought the land in 1835. Nor does it refer to the original tenant farmer’s cottage that was previously on the site (it was built in the 1690s). I asked the guide and he surmised Irving just wanted to add an old-timey touch to the place. It seems the great writer left us one last mystery. Or, knowing the author’s whimsical sense of humor, one last joke.

The TV show, of course, mentions nothing about Washington Irving — because in the world of the show, none of this is fiction — so Sunnyside will likely never make an appearance. The writers do throw in one nod to Washington Irving, though: one of the policemen is named Captain Frank Irving (Orlando Jones). Who may or may not turn out to be evil. Which I think old Washington would’ve enjoyed.

Love to get creeped out while still learning absolutely true historical facts? Check out our Macabre NYC Walking Tours!