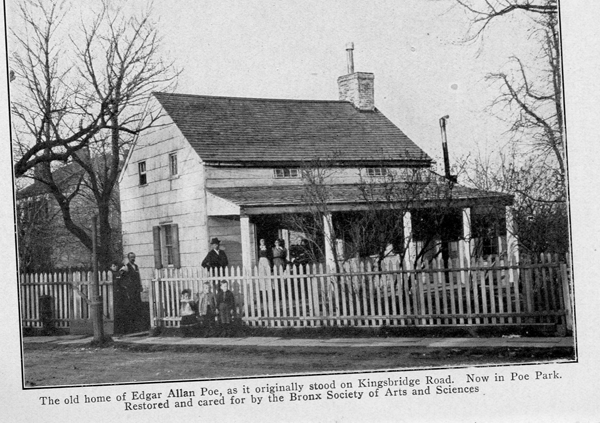 When it comes to Poe, the truth is, indeed, stranger than fiction. Or what we know of the truth, that is.

In my last post I noted the general facts of his life – a brief one, marked by pain, death, misery, poverty, and the repeated loss of every woman he ever loved – as well as discussed some of the myths (his reputed opium addiction may not have been real, though his alcoholism almost certainly was) but I stayed away from the story of his dark, final days in Baltimore to focus on the achievements of his writing and life. It was, after all, a celebration of his birthday.

But for the curious, here’s what we do know about his inglorious end: first, he had already been travelling extensively for about two years prior to his death. In 1847 his wife Virginia succumbed to tuberculosis, and Poe left the Bronx cottage that was his last permanent (well, permanent for Poe) residence to travel up and down the east coast on a series of desultory “lecture tours.” These lectures were little more than desperate cash grabs, as he was well and truly destitute.

He had two romantic dalliances, both ending up null. In Providence, Rhode Island, he courted the poetess Sarah Helen Whitman who, while she may have returned his fond feelings, found the relationship stymied by her mother, brother, and presumable the rest of her family. Poe, by that point, had become increasingly erratic in his deportment, and apparently appeared in public more than a little drunk on several occasions.

Undeterred by this rejection, Poe then went on to court his childhood sweetheart, Sarah Elmira Royster, in the city of Richmond, Virginia. That relationship, too, ended without an engagement, though not for a lack of several proposals.

It is unclear what Poe’s motivations were in these frantic attachments. Very likely he was still addled by grief, having been terribly affected by the death of young, beautiful Virginia. Perhaps also as likely, Poe’s financial situation was such that he hoped desperately to marry money.

As it happened, Poe showed up in Baltimore in early October 1849. In the film The Raven, he is depicted as still semi-functional, lucid and coherent, which historical evidence suggests he was not. The last six days of his life were marked by repeated humiliations, from being thrown out of a newspaper editor’s office when he went begging for work, to having to pawn his clothes for money. When he died he was wearing a cheap, worn out suit that was not his own. Though poor, Poe never appeared in public in less than a neatly pressed and brushed suit. His dress at the time of death certainly suggests at least a pawnshop exchange, if not something more mysterious and sinister.

Poe had attempted once or twice before to quit drinking. It is said that he suffered from fearsome hallucinations while in the throes of the DTs, including a particularly gruesome one in which he saw his own mother-in-law’s legs hacked off at the knees; she went around on the bloodied stumps screaming for mercy as he looked on, helpless.

In the film, Poe’s last moments are delicate, graceful, even genteel, as he serenely passes into unconsciousness on a park bench. In reality, he is variously described as having been found wandering around the streets raving, passed out in a back alley, or semi-conscious and half-beaten behind a polling station (depending on your source). The polling station theory is an interesting one: Poe may have taken money to work as a “repeater,” someone who voted multiple times in the brazenly corrupt municipal elections that seemed to characterize the 19th century. The beating may have come from the hands of another down-at-heel repeater looking to double his payday.

Finally there is the matter of the word “Reynolds.”  In reality, the mystery of the muttered word he repeated in his final ravings has never been solved. One biographer has a theory, though. When Poe was writing “Descent into the Maelstrom,” he relied on a scientific tome by an author named Reynolds for information on the climate of the South Pole. His research may have stuck with him as he made his own, final, descent in the swirling depths of death.

See? Fiction has nothing on fact when it comes to Poe.

A great way to learn more about Poe is, of course, to take my tour! I’ll tell you all about the nine-odd years Poe spent living and writing in New York City. I’ll not only show you the site of his former home, we’ll show you where he walked, taught, and drank. What’s more, I’ll throw in lots of other local ghosts as well.