Lately I’ve been reading some great history books dealing with the dark and criminal side of the city’s past and true crime in New York City. One is an old classic, the other just came out last month. I thought I’d share these with you and at the same time let you know about a couple of cool mysterious events going on around town, from my Murder, Scandal and Vice tour to the stage show Murder For Two.

New York By Gaslight is an 1850 collection of “urban sketches” by journalist George C. Foster. Foster spent a lot of time out in the streets after dark, and served up “slices” of New York life to a reading public eager to learn about what went on in the city while respectable folks were asleep. Armchair slummers could learn about female “sidewalkers” who “hooked” their victims (fun fact: hookers got their name because there were so many of them in Corlear’s Hooks; but the style of procuring a date also led to their colorful moniker), or the high-class “cyprians” who worked off the streets in the city’s brothels, which Foster calls the “Golden Gates of Hell!” You could take a midnight ramble to the town’s many oyster palaces and drinking-saloons, or aim a little lower and go to an oyster cellar or dance-house in Cow Bay in the Five Points. This incredible book makes you feel like you’ve stepped back in time and are heading for a stroll up Broadway in 1850 with a carefully chosen guide. The meaty introduction by Stuart M. Blumin in the edition I purchased is worth the price of admission alone; it’s not only a great history of low-life New York that beautifully supplements Foster’s book, but it add a lot of insight in the life of Foster himself, including the fact that he was good friends with none other than Poe’s nemesis Rufus Griswold! 19th century NYC was a very small town indeed. 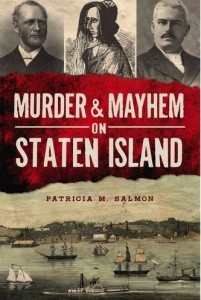 For those willing to venture to the outer boroughs, Patricia M. Salmon’s Murder & Mayhem on Staten Island weaves mostly 19th-century tales of bootleggers, murderers, and bodies found in barrels off the coast of the city’s isolated island borough. Naturally included is the story of Polly Bodine, which I wrote about here, and her sordid tale is one of the highlights of the book. The tales themselves are fascinating local histories, and the research that went into this book was obviously meticulous and thorough, the product of a lifetime of dealing with Staten Island lore (the author is the former curator of history at the Staten Island Museum) but there is no excess fat here. The blunt, pared down prose gives these old-time stories the feel of a pulp novel or the rat-a-tat rhythm of a film noir. For fans of police procedurals and those who like their facts unembroidered, this book serves as an excellent introduction to Staten Island’s grisly past. 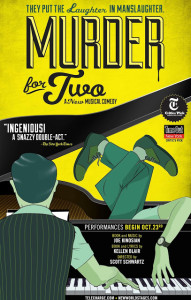 At the utter opposite end of the spectrum, those who like their murders fictional and very silly indeed can take in a show of Murder For Two, a comedy musical murder mystery now playing at the New World Stages. The production company approached me asking if I’d be interested in taking in a show and while I haven’t had time to see it yet, I thought I’d put the word out there to my many fans who like a good murder as much as I do! Described as a “zany 90-minute whodunit,” the entire show is performed by two actors, one who plays the detective and one who plays all the other parts, which sounds very zany indeed. And did I mention it’s a musical? The producers also very generously provided me with two comp tickets for my loyal army of nerds, so I’m going to raffle them off on next Saturday’s Murder, Scandal and Vice tour.

To score these sweet comps, just sign up for the Murder, Scandal and Vice: Crime & Corruption in 19th Century New York tour on Saturday November 23rd and you’ll be automatically entered in the raffle. The tour begins at 2pm by City Hall Park, and ends approximately an hour and a half later in Chinatown. You’ll learn all about the scandals and crimes of 19th century New York, including some murders that still remain unsolved, as we go slumming from Park Row to the Five Points, in true George Foster style. 19th Century New York was a bustling city that seethed with scandal and was filled with murder, corruption, and vice of all flavors. From the lowlifes of the Bowery to the tragic women of McGurk’s Suicide Hall, we’ll explore the shadiest, tawdriest, and most notorious stories of old New York.

And, for those who have already seen Murder For Two, just present a copy of your receipt or ticket stub and I’ll give you $5 off the tour, just because I know you’re good people. I mean, you went to see a show that puts the “laughter in manslaughter,” so I know I’m going to like you.

For more on how to redeem this offer, email boroughsofthedead@gmail.com.