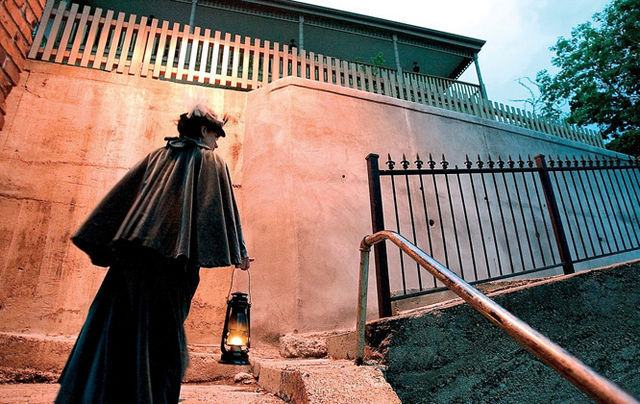 Would you believe this woman?

When you take a historical or ghostly walking tour, do you want your tour guide to be in costume? I’ve been thinking about this a lot lately. On the very first New York City ghost tour I ever took, two guides were present — one in a long, black, flowing dress and one in jeans and a Yankees jacket. The group was large enough that we had to be split into two, and I remember thinking, “I hope I get the one in the black dress.” I got the guy in the Yankees jacket, and his tour was just OK. Neither superb nor terrible. Decent. Later, I took another tour with the same company and was excited to get the girl in the black dress. But surprisingly, she was no better than the dude in the Yankees jacket. In fact, I now began to appreciate his sense of humor more, and rather thought the girl in the black dress was a bit of a letdown.

Ultimately, Boroughs of the Dead has adopted an official do-what-thou-wilt policy when it comes to our guides’ sartorial choices. Whether clad in Victorian black or simply wearing those newfangled denim trousers everyone’s talking about, our guides wear whatever they would normally wear. We feel that sticking with our personal style keeps things true to our vision, so that’s what we do. While there are plenty of good tours featuring capes and costumes, that’s just not our particular preference.

What do you think?