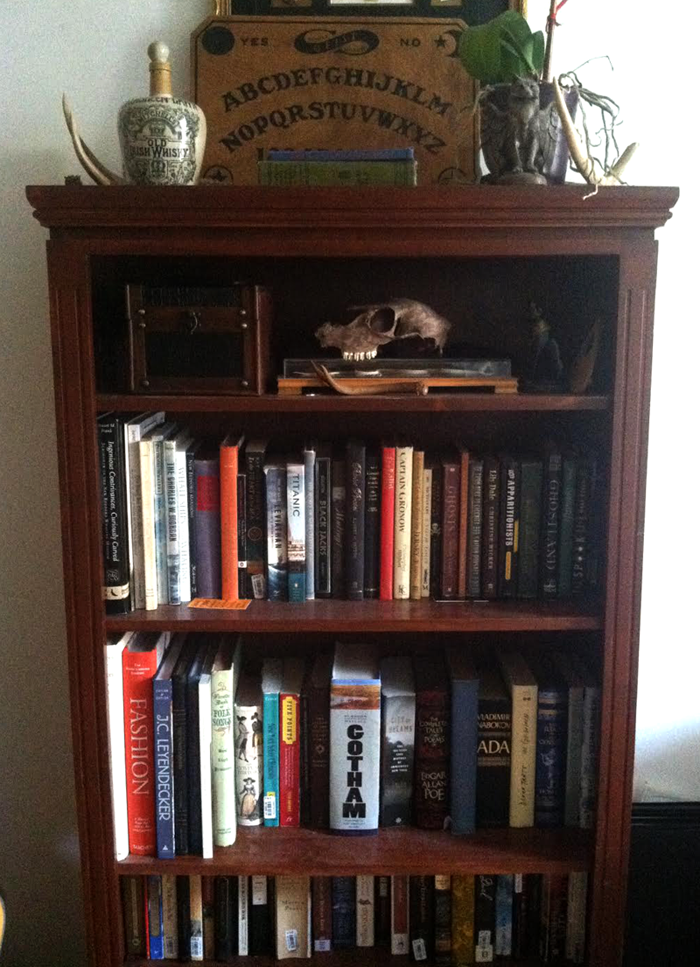 Possibly the number one question I get on my tours is, “Where do you get all these stories from?” This question is tied for number one with “How did you get interested in all this dark stuff anyway?” You can find the answer to that one here. As for where I get my stories from, the answer is simply loads and loads and research.

There’s never enough time to tell every story on a tour, and yes, New York City is literally the city of a million stories. Here are a few of my favorite books, ones that I recommend freely to anyone interested in learning more about the dark and scandalous side of New York City history:

The Murder of Helen Jewett by Patricia Cline Cohen. The tragic tale of a girl born clever, beautiful, and poor in a Maine backwater, who was “ruined” by an unnamed man while still in her teens and fled to New York to reinvent herself as the beautiful prostitute Helen Jewett. Helen was an avid reader and writer, known for sailing down Broadway in silk dresses en route to the post office to mail her daily letters. When she died, her room was filled with novels and poetry, from Bulwer-Lytton to Lord Byron, whose framed portrait hung near her bed. Some moralists claimed the influence of poetry and novels was directly responsible for her ruination and death. Helen’s story is captivating, incredibly sad, and utterly unforgettable.

Two other wonderful books about 19th century murders are Butchery on Bond Street by Benjamin Feldman and The Beautiful Cigar Girl by Daniel Stashtower, which deal with two of the most shocking murders in New York City history, one of which, the murder of Mary Rogers, remains unsolved to this day.

There are plenty of books about old New York’s scandalous and seamy underbelly but two of my favorites are Low Life by Luc Sante and Gangs of New York by Herbert Asbury, both of which have to be taken with a grain of salt since both contain many historical inaccuracies (particularly the Asbury book). But Asbury’s slangy, captivating style, and Sante’s sublime prose make both highly worth reading and incredibly entertaining. A contemporary historical record is New-York by Gaslight, an urban sketch of the city’s underworld by George C. Foster. It’s written in the somewhat hyperbolic style of a journalist looking to sell as many copies of his book as possible, but it’s definitely worth seeking out as one of the era’s most fascinating historical artifacts still readily available in print.

To really set the record straight on many of the myths expounded in Low Life and Gangs of New York, there is no better resource than Five Points by Tyler Anbinder. This indispensable books tells it how it was — what Five Pointers were really like, where they came from, and how they really lived — and it’s written in an accessible and engaging style that stands out in a sea of historical references books that are often riddled with padding and repetitions. There is no excess in Five Points’ 440 pages, and you’ll breeze right through it.

On a less scandalous note, Mary L. Knapp’s An Old Merchant’s House describes the day to day life of a middle-class household in 19th century New York. Using the Merchant’s House Museum on East 4th Street as a lens through which to view all aspects of life in the city, from dress to courtship to servants to grocery shopping, it’s a vividly written slice of life and one of my favorite recent additions to my personal NYC history library. Of course the Merchant’s House is purported to be haunted, but even without anything supernatural, it’s still a fascinating place on its own.

My Dark Histories of Lower Manhattan tour would be incomplete without New York Burning by Jill Lepore, which tells the tale of one of the most frightening and disturbing chapters in our city’s history, and Recollections of Life On The Prison Ship Jersey written by Thomas Dring and Edited by David Swain, a first-person account of life aboard one of the prison ships in Revolutionary Era New York. Be forewarned: neither of these books are for the faint of heart. The past is a violent and terrible place.

Naturally, ghosts and phantoms abound in a city stuffed so full of violence, scandal, murder and death, and Ghosts I’ve Met and Where The Ghosts Are  by Hans Holzer provide us with a glimpse into the true accounts of a mid-twentieth-century ghost hunter who cataloged many of these tales for us. Again, Holzer’s stories have to be taken with a grain of salt: for instance, he discusses the DeFeo house of Amityville Long Island as though there were real spirit activity present, when in fact the Amityville Horror was proven to be a hoax years ago (sorry if you didn’t know that). All of his New York stories require further verification and research, though many of them have been verified by other sources. 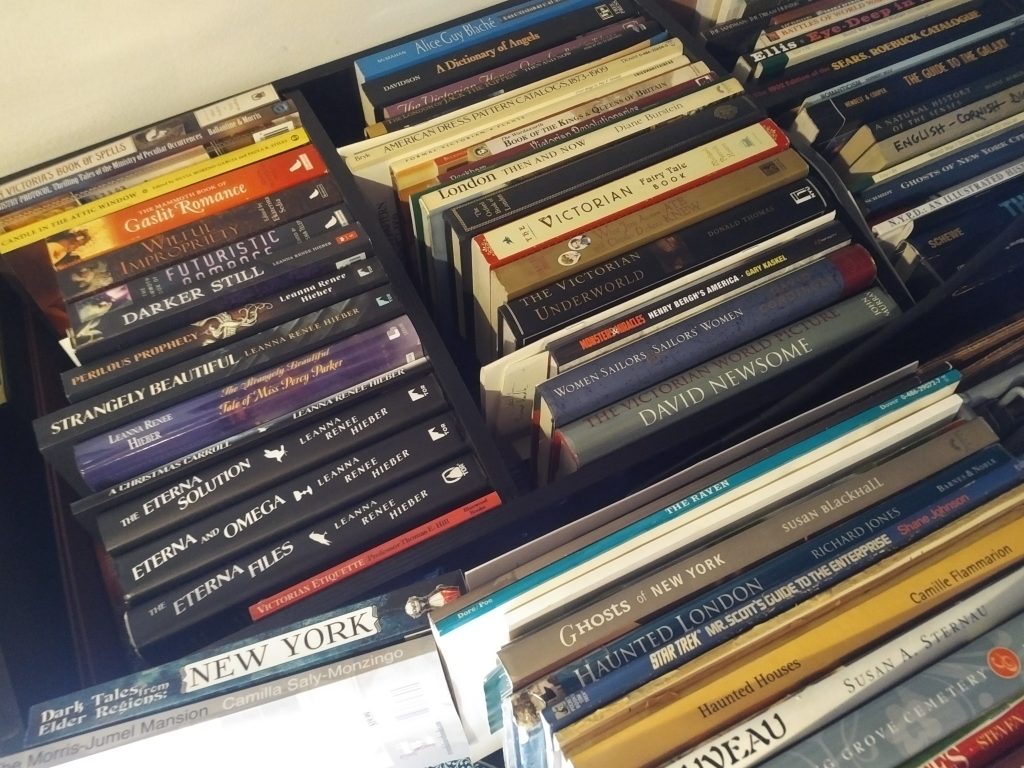 One of these is the story of the haunting at 14 West 10th Street, discussed in Spindrift: Spray from a Psychic Sea by Jan Bryant Bartell. This is the true account of a woman who lived in a haunted house for over a decade. Her story actually includes an account of Hans Holzer’s seance at her home (at her request) but casts some skepticism on his version of accounts. It is difficult to know whom to believe; I say, read the book and walk by the house and decide for yourself. Better yet, take my Ultimate Greenwich Village Ghost Tour and we’ll discuss it all together.

Finally, one of my favorite tours, Edgar Allan Poe’s Greenwich Village is heavily informed by the book Edgar Allan Poe: A Critical Biography by Arthur Hobson Quinn. There is so much terrible junk written about Poe, but this book is one of the few sane and rational treatments of Poe’s life and work available today. At 695 pages, it’s a door-stopper, but worth it if you’re a true fan of Poe.

What follows is a list of materials used in the development of our Ultimate Greenwich Village Ghost Tour. Some sources deal with NYC history, ghosts, and folklore; others deal more broadly with the world of the spiritual and paranormal. These references should all be read as you would read any book — with a critical mind and inquiring eye. This list is for information purposes only; Boroughs of the Dead makes no claims about anything in any of these books, and cannot be held responsible for their content, or for any evil spirits unleashed by the reading thereof.

New York City Folklore by B. A. Botkin

Ghosts and Murders of Manhattan by Elise Gainer

Some Say They Never Left: : Spirited Tales and Ghostly Legends of the Merchant House Museum

Triangle: The Fire That Changed America by David Von Drehle

And Hell Followed With It: History and Hauntings of American Disasters by Troy Taylor and Rene Kruse

An Encyclopaedia of Psychic Science by Nandor Fodor (1934)

Haunted People: The Story of the Poltergeist Down the Centuries by Hereward Carrington and Nandor Fodor

A Magician Among the Spirits by Harry Houdini

The Witch of Lime Street by David Jaher

The History of Spiritualism by Sir Arthur Conan Doyle

The Reluctant Spiritualist: The Life of Maggie Fox by Nancy Rubin Stuart

Talking to the Dead: Kate and Maggie Fox and the Rise of Spiritualism by Barbara Weisberg

The Architectural Uncanny by Anthony Vidler