The Friendly Horror and Other Weird Tales 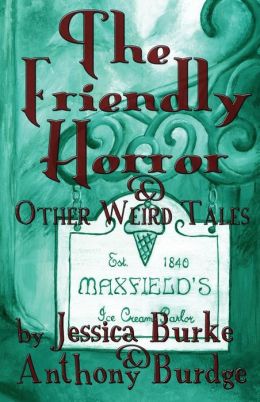 They call it the forgotten borough: Staten Island. Lonely, remote, looming, mysterious. Filled with abandoned cemeteries and hospitals, haunted houses and crumbling forts, the ghastly urban legend of Cropsey, and the notorious Willbowbrook State School (now repurposed for an undergraduate college). Small wonder that many of those who live there have a keen interest in the paranormal; their home seems eerily imbued with an indelible touch of the uncanny. Two Staten Island residents, Jessica Burke and Anthony Burdge, have woven the strange history of the island into their fiction, a marvelous Lovecraftian collection of short stories called The Friendly Horror & Other Weird Tales.

“The Friendly Horror” is an epic-length short story, almost bordering on novella, yet it is a swift and engrossing read. The intertwining of local Staten Island history into the Lovecraft mythos is an ingenious touch — reading it, you quickly become aware that you are miles away from pastiche or standard Cthulhu fan fic. The story is stuffed full of in-jokes of both the literary and the historical kind, yet it never feels as though the authors are showing off or shoehorning it in. Rather, it feels like the loving work of ardent fans, widely read and well versed in their obsessions, who are evidently taking as much delight in the proceedings as their readers.

The premise is basic, but with an admirable touch of the truly bonkers: the Deep Ones, having been thoroughly decimated, decide to regroup and find their way back to the sea through the running a successful ice cream franchise:

“Grandfather Fern and Aunt Julia together realized that with the family in disarray after Innsmouth, it was up to them to continue the traditions, to rebuild the family, and to bring them all back to the sea — this innocuous ice cream became the key, so to speak, to our glorious resurrection.”

The ice cream flavors are all hand-crafted and uniquely specialized, their very names “replete with the summer and the shore,” like Salt Water Taffy, Crab Cakes, Stormy Seas, and Sandy Beach. When the denizens of Staten Island begin to develop insatiable cravings for the frozen treats, one knows there is something unwholesome about the Crustacean Crunch.

The Maxfield ice cream saga is told in flashback via Silas Billop Maxfield, who has begun the somewhat painful transformation from human to octopoid in preparation for the Great Rising, and is tape-recording his tale for posterity. Silas acts as our tour guide and interpreter, and we occasionally venture out with him in the ice cream truck as he sells his confections to aggressive small children with thick Staten Island accents. Through him we are treated to the wide swath of island history and family history, learning that cousin Howard Phillips himself was the fellow who came up with the idea of selling New England’s best ice cream in New York. The H.P. Lovecraft cameo is handled artfully; there is a delightful pleasure in the irreverent image of starchy old H.P. eagerly sampling “great scoops” of ice cream, and in sentences like, “Howard was a firm believer that ice cream could, and had, changed the world.”

Anyone well-versed in their Richmond County history will, of course, recognize the surname “Billop,” in the Old Billop House, now known as the Conference House. Built by Captain Christopher Billop in the 1680s, it was the site of the only British-American peace conference during the Revolutionary War, and is incidentally widely reputed to be haunted. Other famous Staten Island sites, such as the Seaview Hospital and Staten Island Farm Colony, and Seguine Mansion, are skillfully integrated into the narrative of “The Friendly Horror.”

And though the story is all in the realm of the imagination, the authors did discover in the course of their writing an astonishing coincidence concerning the real H.P. Lovecraft and Staten Island: in a letter dated September 29th, 1924, Lovecraft wrote:

“On Sunday I took an all-day jaunt to elder regions. I embarked on the Staten Island ferry, and was soon in a land of quaint villages that might have been five hundred miles from any metropolis… And there I took a wheezy accommodation train for Tottenville, on the far tip of the island, which when reached savored of Pascoag. A short walk out of Tottenville, embowered among antique pines on the south shore and now in a state of vast decrepitude, is the old Billop house… both impressive and terrible in its steep and hoary gable — one could write a story about it.”

Lovecraft’s appearances, both literal and figurative, also influence the rest of the short stories in this collection, which range from whimsical to very dark, in order of increasing grimness (an interesting arrangement on the authors’ part). The stories all succeed on their own levels, especially “Concerning the Storm,” which bears fresh scars of Hurricane Sandy, a storm that brutalized Staten Island’s southern shore. The story brings a speculative element to the storm, but the real horror that runs beneath the narrative surface is one beyond man’s capabilities or imagining, and the authors convey this helpless terror in haunting fashion.

The Friendly Horror and Other Weird Tales is available on Amazon and Barnes and Noble.