Frau Perchta isn’t as well known as Krampus these days, which is a shame, because this Christmas-time goddess/witch/all-around-terrifying-gal deserves a lot more press. She’s a staple in the Alpine regions of southern Germany and Austria, but relatively under-the-radar in North America. So let’s get to know Frau Perchta a little better, shall we?

According to Linda Raedisch, the author of The Old Magic of Christmas (a book we’ve blogged about and recommended before), Frau Perchta was also known as Berchta, or Bertha, and has also been called “Spinnstubenfrau” or “Spinning Room Lady.” She is often depicted with a beaked nose made of iron, dressed in rags, perhaps carrying a cane, and generally resembles a decrepit old crone. But this old crone packs a mighty wallop…. and carries a long knife hidden under her skirt.

She also bears a resemblance to the Scandinavian goddess Frigga, and both of them share one obsession in common: spinning, specifically, and domestic neatness generally. Frankly, she’s pretty judge-y about the state of your home for a woman who dresses all in rags. Legend has it that you’d better get all your flax spun by Twelfth Night (January 6th), “for when the Christmas season was over, it would be time to set up the big upright loom, at which time you must have enough thread to warp it and start your weaving.” And what’s Frau Perchta’s punishment for those lazy ladies who haven’t finished all their weaving? “In Germany, Austria, and Switzerland, there were numerous tales of Frau Perchta trampling and even settling fire to the half-spun fibers.” And if should you really irritate her? Like, say, not only is your flax not spun, but your house is a total mess (this domestic goddess/witch hates a messy house) and you’ve even failed to leave out a traditional bowl of porridge for her? Well, then her rampaging will extend far beyond your slovenly spinning room. She’ll do nothing less than steal into your bedroom, disembowel you and replace your guts with rocks and straw.

Do not eff with Frau Perchta, got it? 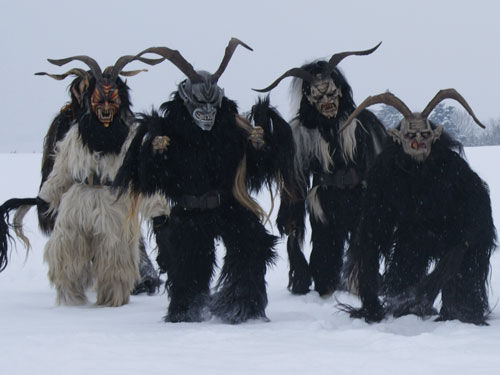 But Perchta does more than just check up on your spinning. Other legends equate Frau Perchta with the legend of the Wild Hunt, and say that she flies through the night sky attended by an army of lost souls, including the demonic-looking Perchten, her army of servants who are visually nearly indistinguishable from Krampus. The only way to know for sure is context; Krampus rides abroad at St. Nicholas Eve while the Perchten tend more toward Epiphany, and the last three Thursdays before Christmas, also known as Berchtl nights or Knocking nights. Also among her army of the night are the souls of unbaptized children. Legend has it if you hear the wind and thunder roaring and rumbling through the mountains on the Berchtl nights, you’re really hearing the sounds of Perchta leading the Wild Hunt.

Another one of Frau Perchta’s names is Holle, a winter goddess who’s name means “shining” or “bright” — hence her association with Epiphany, the “Shining Night” on which the star of Bethlehem shone down. Her dual nature is expressed in the fact that there are both “Evil” or “Ugly” Perchten and “Pretty” Perchten, both of whom you might find in a typical “Perchtenlauf” or Perchten run in the Alpine regions of Europe. The Pretty Perchten are all well and good, but honestly, I’m a bigger fan of the Evil Perchta, and she’s the one I love to fear in these days leading up to Christmas. With every passing moment my anxiety mounts as I try to finish, if not all my spinning, all my housework and cleaning in time for the Christmas season.

As I sweep and mop and clean and dust, I visualize the old crone sneaking into my kitchen late at night, running her withered, clawlike fingers over the baseboards and tops of the cupboards checking for dust. She creeps through the house like a mad Martha Stewart crossed with the Grinch Who Stole Christmas… and if I should fail in my housekeeping…. well!

Let’s just say it really motivates me to pick up around the house.

So this January 6th, instead of bemoaning the fact that Christmas is over, why not celebrate “Perchtentag” by telling your kids they’d better clean up their rooms or Frau Perchta will come and disembowel them in the night. Kids love that sort of thing.

Happy holidays! May Frau Perchta smile upon you!