The Death of Young Edgar Poe: Some Observations on William Wilson

“Oh, outcast of all outcasts most abandoned! — to the earth art thou not forever dead?”
– Edgar A. Poe, William Wilson

Every year, I read or re-read a shorty story or poem by Edgar Poe. This October I had a craving to revisit William Wilson. As I read it, I was struck by the significance of the story’s settings and the parallels between the story and events in Poe’s real life. The thinly-veiled stand in for his alma mater, the University of Virginia, particularly evokes an important event that changed the course of Poe’s life forever. (You can read Edgar Allan Poe’s William Wilson online here.)

Edgar Allan Poe’s dorm room at the University of Virginia

For those who need a quick refresher, William Wilson features an eponymous narrator who is tormented by the existence of a man who is his exact double, right down to his first and last name. The narrator initially meets his doppelganger in primary school, then encounters him again in college, and finally clashes with him in his dissipated adulthood. Wilson ultimately ends up killing his double, though the story’s ambiguous ending implies that the narrator may have actually killed himself. It’s a complex and ambitious story, and arguably prescient in its anticipation of certain psychological principles.

A Tale of Two Edgars

Modern critics have reveled in the story’s use of doubles, and reams have been written on its symbolism and psychology. On one level it can be read simply as a story of an evil man tormented by his conscience. A more delightful reading imagines the narrator is the Jungian shadow-self of the goody-goody double and the entire story takes place in a dream world. Either way, it’s amazing. Clearly Poe realized that he’d created something wonderful with William Wilson, and he counted it among his favorite and best stories.

You could leave the readings of William Wilson right there and still live a rich, full life, but if you’re me, you want to take things into the realm of biography for a minute, because that’s kind of what you do for a living. And because something in particular is jumping out at you. Namely: isn’t it a little significant that Poe would focus on his school days as a setting for this story? And isn’t it even more significant that Wilson’s downfall begins during a card game played in a college dorm?

A Fateful Game of Cards 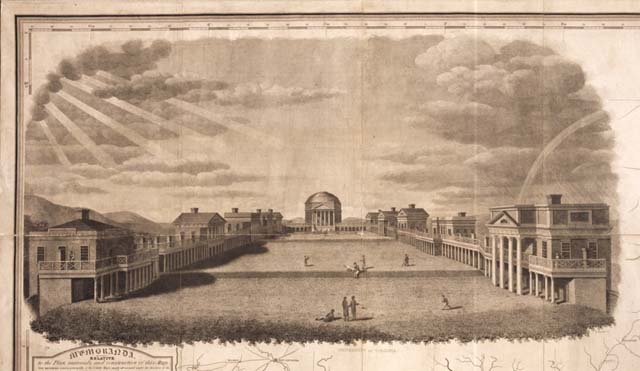 Poe’s description of Wilson’s college, while disguised as Oxford and called, “the most dissipated university in England,” is obviously meant to evoke the University of Virginia, whose student body in the 1820s was notorious for drinking, gambling, fighting, and dueling. Poe even employs the name of a real-life college friend (Preston) in William Wilson and, significantly, uses the playing of cards as a major plot point. Famously, it was Poe’s gambling that got him in huge trouble during his first and only semester of college.

Wilson’s double reveals him to be a cheater at cards, which forces the narrator to leave school in shame and begin his descent into infamy and turpitude. It is an irreversible crisis in the narrator’s life. Wilson wanders from one European city to another forever hounded by his double, who thwarts him at every turn. Poe, too, would leave school under a cloud of humiliation and be destined to wander from town to town for the rest of his life.

Leaving the University of Virginia 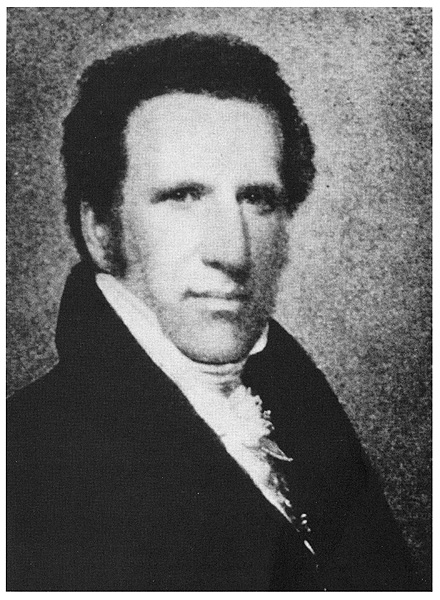 Father of the Year John Allan

Poe’s real life circumstances were different from the fiction, of course. He didn’t leave university because he was cheating at cards, like Wilson did, but rather because his stepfather John Allan refused to supply him with any more money. John Allan, a fairly well-to-do Virginia merchant, had adopted Edgar when the boy was only two years old and had raised him essentially as a future gentleman. Young Poe was sent to a good boarding school when the family lived in England during the poet’s childhood (the Manor House School, which also figures greatly in the first half of William Wilson) and then later the University of Virginia, where he mingled with the wealthy scions of the south.

But John Allan’s ambivalence toward his adopted son was apparent: he sent Poe off to college without sufficient funds to keep him in books, room, and board, to say nothing of keeping up socially with the other boys (who brought valets with them to college). Poe tried to borrow and gamble to keep up with his friends, but was luckless at cards and incurred John Allan’s wrath with his debts. Allan promptly withdrew Poe from school and brought him home to be trained as a clerk in his warehouse. One can easily imagine how much Poe loved being a clerk in a warehouse, and it wasn’t long before the son left home on terrible terms with his adopted father, never to return.

Poe would spend the rest of his life scraping by on the income of a writer and literary critic, which was the only job he had been even remotely prepared for. It was a life of wretched poverty that literally bordered on starvation at times. He was no longer the son of a well-off Virginia merchant, heir to a moderate but respectable fortune. He became instead a “common” man, a working man, self-supporting and struggling; without family, without connections. Where once he’d hoped to live the pleasant life of a gentleman poet, now he was doomed to hackwork, grinding out reviews while somehow miraculously squeezing in time to write his own work on the side. It’s hard not to see echoes of that disappointment in the opening paragraph of William Wilson, which laments:

“Oh, outcast of all outcasts most abandoned! — to the earth art thou not forever dead? to its honors, to its flowers, to its golden aspirations? — and a cloud, dense, dismal, and limitless, does it not hang eternally between thy hopes and heaven?” 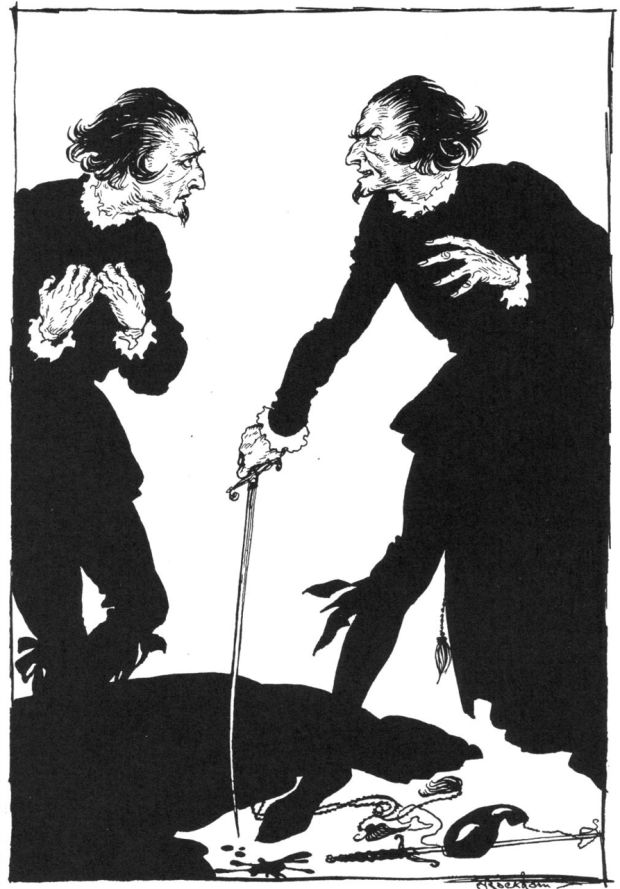 These two versions of Poe – the Affluent Son and the Literary Laborer – are echoed in the two William Wilsons. The narrator’s constant emphasis on social class is especially telling. Wilson despises his own name because it is very common: “Mine was one of those everyday appellations which seem, by prescriptive right, to have been, time out of mind, the common property of the mob.” Wilson hates his double not only for resembling him in every way, but also for being a reminder of the commonness of his name:

“I had always felt aversion to my uncourtly patronymic, and its very common, if not plebeian prænomen. The words were venom in my ears; and when, upon the day of my arrival, a second William Wilson came also to the academy, I felt angry with him for bearing the name, and doubly disgusted with the name because a stranger bore it…”

Twice the narrator refers to himself as a “commoner” while at university, albeit the “noblest and most liberal commoner” at Oxford. Ironically, in William Wilson, the narrator’s parents furnish him with “an outfit and annual establishment, which would enable me to indulge at will in the luxury already so dear to my heart — to vie in profuseness of expenditure with the haughtiest heirs of the wealthiest earldoms in Great Britain.” Clearly a bit of bitter fantasy on Poe’s part.

The Death of Hope

It’s important to remember that this envisioning of “Affluent Son” Poe and “Commoner” Poe is about more than just finances. The Affluent Son represents a version of Poe’s who might have been comfortable, possibly even happy; the Commoner is the literary laborer reduced to a wretched existence of misery and eternal struggle. The former is a child with a family and a home, with hope for the future; the latter is a hopeless and homeless young man cast out into the world. One can then consider Poe a double orphan, first losing his biological parents and then his adoptive parents (his adoptive mother would die of tuberculosis around the same time as his rift with John Allan).

To even begin to reconcile the trauma of finding himself orphaned for the second time, and to find adequate imagery to describe it, Poe could only turn to the language of the criminal and murderous. Nothing else was sufficient to express the visceral horror of such a monstrous betrayal and bitter disappointment. Hence the inevitable murder at the end of William Wilson; only a violent death could satisfactorily convey Poe’s feelings. At the story’s end, the fatally wounded doppelganger reproaches Wilson:

“[H]enceforward art thou also dead — dead to the World, to Heaven and to Hope! In me didst thou exist…”

When considered in relation to the facts of Poe’s life, it sounds less like an accusation than a eulogy.

Are you depressed yet? Yay! You could drink yourself to death OR you could take our “Edgar Allan Poe in Greenwich Village” walking tour this weekend! Running Saturday, October 7th and Sunday October 8th to commemorate the anniversary of Poe’s death, we’ll stroll through the autumn splendor of Greenwich Village while recounting tales of his life, appreciating Poe’s stories and poems, and busting a few myths about the man who wrote the most famous narrative poem in American history. Can’t make it? Read Edgar Allan Poe’s William Wilson and more, at www.eapoe.org.