Edgar Allan Poe and the Witch of Staten Island

Poe has the most amazing way of popping up in New York City history. This makes sense, when one considers the true character — and career — of the man. He was by no means an introverted shut in; rather, he was a man about town, and an accomplished editor and journalist, though one not above the occasional foray into publicity hoaxes. Poe comes out of the woodwork whenever we talk about the murder of Mary Rogers; we mention him when we talk about Newspaper Row (he once borrowed money from Horace Greeley); he is present in the West Village; and he is a part of an interconnected web of antebellum literati that stretches from Horace Greeley (from whom he once borrowed money) to Herman Melville, via their mutual acquaintance and agent Evert Duyckinck, to Charles Dickens, who was charmed by Poe and later sought out Maria Clemm to lend her money after Poe’s demise. And sometimes, he puts in his two cents on the most seemingly unlikely of affairs.

Such is the case with Polly Bodine. 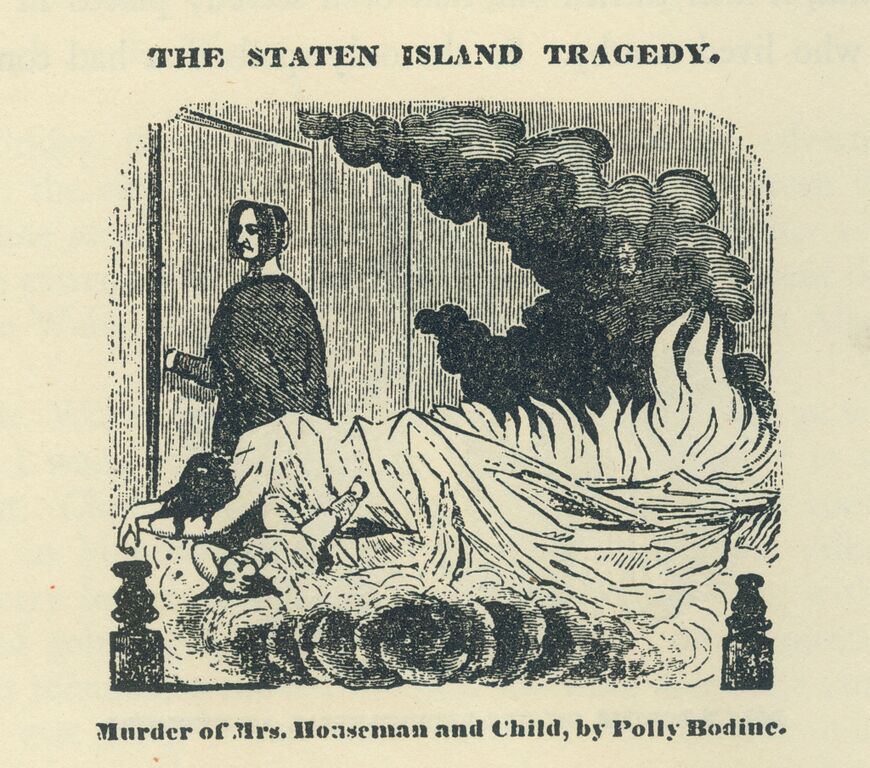 Polly Bodine was a Staten Island woman accused of murdering her brother’s wife, Emeline Houseman, and baby daughter on Christmas Day, 1843. Emeline had been found in her burning home with ‘The back part of the head was very much burned, part of the skull wanting, and the brain baked by the action of the heat.” The baby had been equally violently dispatched. Someone had murdered mother and child and tried to cover their tracks by setting the house ablaze.

According to Ephemeral New York, Bodine was a “’fallen’” woman [who] lived with her parents in Graniteville after separating from her husband. She had a lover, a druggist in Manhattan.” Naturally this created a scandal in Staten Island, then just a rural area with about 10,000 inhabitants. The fact that the day after the murder she was found getting drunk on gin on a ferryboat didn’t help matters either (though in her defense, I think most commuters on the ferry are usually getting quietly drunk in corners).

The scandal and notoriety of the murder soon spread all over New York. P.T. Barnum even made a wax figure of Polly murdering Emeline, which he displayed in his American Museum, aka “the classiest place on earth.” (Don’t get me wrong, I love Barnum. But the man had lapses in taste. For which I love him all the more.) Her first trial ended in a hung jury, the second with a verdict of guilty, which was overturned. Eventually, the only place she could get a fair trial and an unbiased jury was way up in upstate New York, where at least twelve people still hadn’t read all the news about the case.

Now here’s where Poe comes in.

We have the Columbia Spy to thank for the historical record which follows: in 1844, when Poe moved to New York for the second time, he produced a series of dispatches, delightfully called “The Doings of Gotham,” which he sold to the Spy. In the June 18th edition, they printed the following:

The trial of Polly Bodine will take place at Richmond, on Monday next, and will, no doubt, excite much interest. This woman may, possibly, escape; — for they manage these matters wretchedly in New-York. It is difficult to conceive anything more preposterous than the whole conduct, for example, of the Mary Rogers affair. The police seemed blown about, in all directions, by every varying puff of the most unconsidered newspaper opinion. The truth, as an end, appeared to be lost sight of altogether. The magistracy suffered the murderer to escape, while they amused themselves with playing court, and chopping the technicalities of jurisprudence.

As usual, Poe’s breadth of interests is delightful. He was equally at home discussing the affairs of law and philosophy as he was discoursing on beauty and poetic principles. In this instance, he seems really hung up on the court’s refusal admit circumstantial evidence:

Not the least usual error, in such investigations, is the limiting of inquiry to the immediate, with total disregard of the collateral, or circumstantial events. It is malpractice to confine evidence and discussion too vigorously within the limits of the seemingly relevant. Experience has shown, and Philosophy will always show, that a vast portion, perhaps the larger portion of truth, arises from the apparently irrelevant. It is through the spirit of this principle that modern science has resolved to calculate upon the unforeseen.

Unlike the Mary Rogers case, however, he did not involve himself any further with the case of Polly Bodine (as far as I know). Still, it is something of a thrill to stumble on the commentary of Poe in his crime-writer guise, all the more so when it concerns a homegrown murder in one of our very own boroughs of the dead.