Boroughs of the Dead Featured in Rue Morgue Magazine

Check out the May issue of Rue Morgue Magazine, which features Boroughs of the Dead in a thrilling round up of NYC’s darkest tourism destinations. Peter Gutierrez‘s “Dark Empire” lists Boroughs of the Dead alongside Green-Wood Cemetery, Atlas Obscura, Morbid Anatomy, and others — some pretty amazing and impressive company. 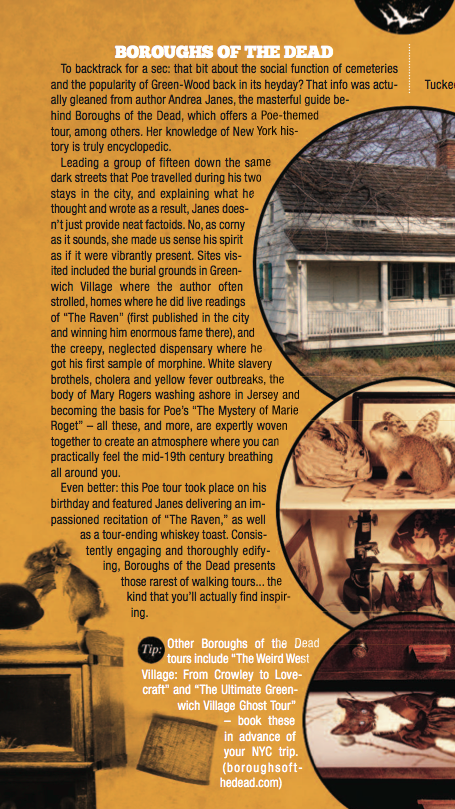 Appropriately enough, the tour Gutierrez reviews in Rue Morgue is Edgar Allan Poe’s Greenwich Village. Gutierrez joined us for the January 19th birthday spectacular edition of this macabre stroll — one of my favorites. The tour was pronounced “consistently engaging and thoroughly edifying,” with tales from Poe’s work and life “expertly woven together to create an atmosphere where you can practically feel the mid-19th century breathing all around you.”

Thanks to Peter Gutierrez for this awesome review. It’s an honor to be featured in a publication named after a Poe story! Though the review was featured in the print edition so we can’t link to the whole article, you can click on the image at left for a sample. Back issues can be ordered at Rue Morgue Magazine.