The Victorian Book of the Dead 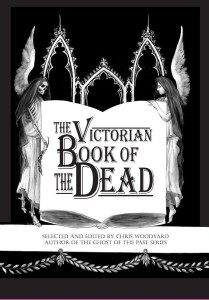 Chris Woodyard knows that the morbidly-obsessed Victorians had “as many words for death as the Inuit do for types of snow,” and she shares her knowledge in the relentlessly fascinating compendium of grim 19th century arcana, The Victorian Book of the Dead.

The news stories collected and edited by Woodyard were gleaned from thousands of old newspaper articles, and are organized by topic, from “Victorian Personifications of Death,” to “Crape: Its Uses and Abuses,” and “Grave Errors: Exploding Corpses, Flaming Formaldehyde, and Other Funeral Fatalities.” As these title chapters indicate, there is an abundance of mordant humor woven throughout these pieces, which I really enjoyed. In fact, though I appreciated the grim, maudlin, and “grewsome” (an alternate spelling the author seems to delight in) aspects of these tales, I found myself surprisingly attracted the funnier side of these excessive Victorian mourners, who I think had more of a sense of humor than people give them credit for. The tales are at their very best, though, when they stray into the realm of the utterly bizarre, which they do more often than not.

I took an excessively long time to write this review, because I so thoroughly enjoyed thumbing through the book that I didn’t want to get to the end of it. Rather than reading straight through, I flipped, meandered, and wandered among the anecdotes like a stroller walking through a particularly picturesque and winding cemetery pathway, pausing to peer here and there at the more intriguing stones.

While the book is indexed and cites its references thoroughly enough to work as a reference book and scholarly resource, and I’ll definitely use it as such, the sheer variety and fun of the strange, marginal, little news items in here invite the meandering approach. It’s a perfect book to keep by a bedside or on a coffee table, and flip through whenever the urge strikes. You’ll never find anything less than the unexpected. There is so much material in this book that it’s impossible to list, but here are just a few of my favorite headlines:

PARROT WAS A GAS FIEND: At Last Killed His Owner by Tearing Off Burner While She Slept

TOMBSTONE MADNESS: A New Form of Mania that Affects People Who Guard Cemeteries

EMBALMED IN WHISKY: Kentucky Man to Be Buried in a Tank of Old Bourbon

Some of the headlines are at once sad and awful:

EATEN BY RATS: Fate of Twin Sisters in an Ohio City

And some aren’t news items at all. The following terrible jokes, which I admit I found amusing, come from the humor pages, and make fun of the feminine frivolity of widows:

“Do you think Julia will always keep on mourning for her husband?”

“Yes, she is going to marry a man named Black.”

Willy: Pa, what kind of plants are ‘widow’s weeds’?

Pa: Oh, a sort of mourning glory, in most cases.

There’s also an entire chapter devoted to ghosts, which has always been one of my favorite things about 19th century newspapers: that they would actually print ghost stories as though they were news.

The tonal mix of maudlin and moving, bizarre and informative, is what makes these articles so compelling. I also like the editor’s choice to present these snippets of the past with minimal intrusion; instead of regurgitating information and creating a Wikipedia version of history, Woodyard simply presents the past and lets it speak for itself, only interjecting to provide context and background where needed.

The only single quibble I might find with this book is with its layout and typeface. The demarcation between the author’s notes and the articles themselves was a bit too seamless, distinguished only by all-caps headlines and a slight indentation in the width of the margins. I would have liked perhaps for a different font to be used for the article reproductions themselves, to refresh the eye while roaming among the pages. Otherwise, this book was perfectly delightful and I’d recommend it to anyone interested in the rituals, taboos, and fashions of mourning 19th century America, or for those with a grim sense of humor and a taste for the bizarre side of human life — and death.