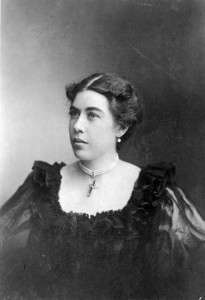 I’ve been reading a lot about Titanic lately, as I do around this time every year, and one of my favorite surprising recent discoveries has been that the real “Unsinkable Molly Brown” is actually far, far more interesting than movies and TV would lead us to believe.

With all due respect to the awesome Kathy Bates, depictions of Margaret “Molly” Brown in popular culture have been reductive stereotypes that paint Ms. Brown as some kind of loudmouth, new-money, Annie Oakley-esque creature. The 1997 movie-that-shall-not-be-named paints her as this arriviste who’s sort of shunned by the old money types aboard Titanic. In fact, she’d just come back from wintering with the Astors in Egypt, so there goes that theory. And, despite the Broadway hit named after her post-sinking quip (“The ship can sink but I can’t; I’m unsinkable!”), she never referred to herself as Molly. (The producers settled on Molly because it was easier to sing and rhyme and all around catchier than Margaret.)

So, what is it about the real Margaret Brown that makes her such a class act? Well, this:

According to Tim Maltin’s 101 Things You Thought You Knew About Titanic But Didn’t, “In reality, Margaret Brown was well-connected and well-educated… She was one of the first students to enroll at the Carnegie Institute in New York, where she studied languages and literature. She spoke French, Russian, and German, and her linguistic skills proved an asset for communicating with immigrants who spoke no English on board [the rescue ship] Carpathia.”

Not only was she smart, she was kind and helpful, too: she established a Survivor’s Committee and helped raise $10,000 for those left penniless after Titanic‘s sinking, even before Carpathia reached New York — in other words, in three short days. While aboard a rescue ship.

Then when she got to New York, she refused to leave the ship “until she had ensured the survivors all had somewhere to go.” About a month later, she presented Carpathia’s captain and crew with a silver cup and several medals to thank them for saving the Titanic survivors.

And she didn’t stop there. Again, according to Maltin:

“Margaret was also notable for her lifelong advocacy of women’s and labor rights, literacy, and education, and used her post-Titanic fame, along with her fortune, to speak out about these issues. She was one of the first women in America to run for political office, helped by living in Colorado, where women had had the vote since 1893. She also chaired an international conference on women’s rights in 1914. In 1932, she was awarded the French Legion of Honor for her ‘good citizenship,’ including her ongoing work on behalf of Titanic survivors and her relief work during the First World War.”

So if you were in Manhattan on the uptown 6 train this morning around 10:45, and you saw some weird lady stand up and cheer, “Go Molly!” that would have been me. “Go Margaret” just didn’t have the same ring to it.

Find out more about some of the other fascinating women and men of the Titanic this Saturday, April 11th and Tuesday, April 14th.