Scribes and Sailors of Woodlawn Cemetery

Yesterday I headed up to Woodlawn Cemetery for a little visit with my hero Herman Melville. Anyone who knows me knows about my Melville/Moby-Dick obsession (I have one), which is why it’s a little strange that I’ve been living in New York City for ten years and hadn’t visited his grave in Woodlawn. In my defense, I live within easy walking distance of Green-Wood Cemetery in Brooklyn, so it’s hard for me to summon up the wherewithal to hop on a train to visit any other cemetery, especially allllll the way up in the Bronx. Still, lately I’d been feeling a bit like knocking people’s hats off in the street (spring always makes me irritable and morose for some reason) so I counted it high time to get myself to sea. Remembering that I was not a circa-1850s sailor, I settled for visiting old Herman at the boneyard instead. What I found there, to my delight, was a place filled with maritime and literary references. 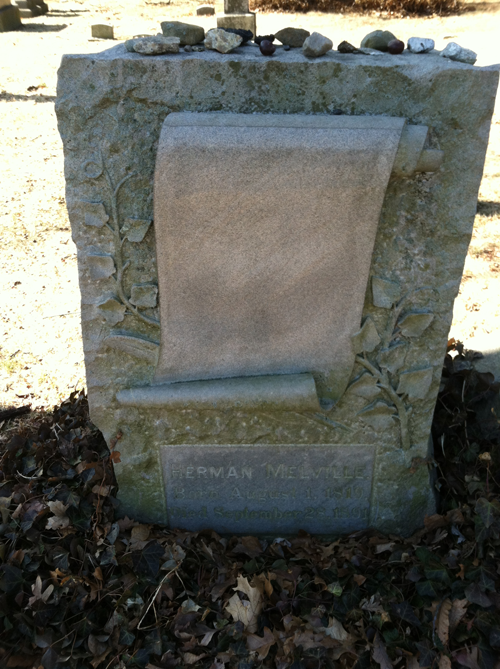 Visiting Melville’s grave was the first thrill, of course, though I did find it a little odd that his headstone features, of all things, a blank page. Isn’t that every writer’s worst nightmare? I’m assuming the carver was like, “All the Melville quotes are too good, I can’t just choose one!” and hence left it blank. Otherwise, it’s a little hard for me to fathom why he would choose to taunt us with this unwritten page. 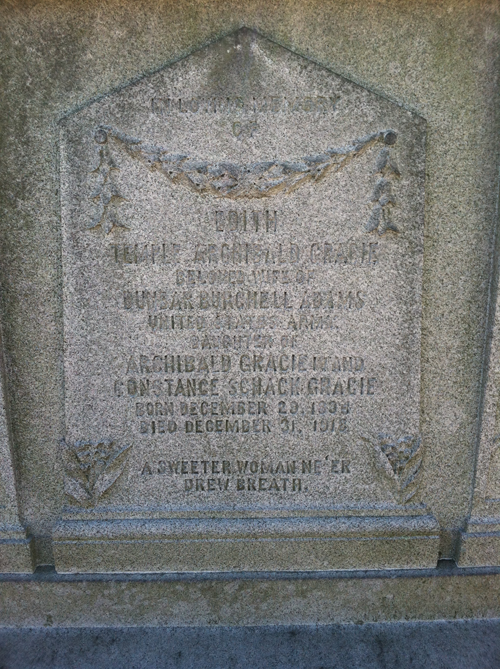 Gracie was one of the last survivors to leave the ship, and one of the very few who actually survived contact with the frigid water. He distinguished himself by assisting Captain Smith and Second Officer Lightoller until the very end. When the Titanic foundered, Gracie was actually submerged in the freezing Atlantic and survived by swimming over to an overturned lifeboat, to which he clung until the rescue ship Carpathia came along. Gracie wrote a memoir about the night, The Truth About The Titanic, which was published in 1913. Sadly, he didn’t live to see its publication; he died in December of 1912, his body never having fully recovered from the trauma of that night. 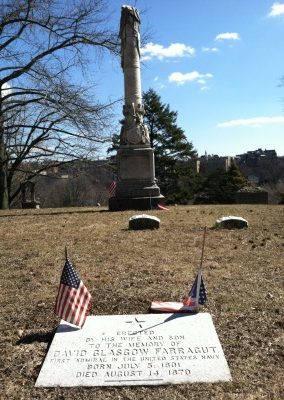 Normally I don’t really go in for military things, but this naval officer is kind of a hero of mine, since he turned a pithy phrase: Civil War Navy Admiral David Glasgow Farragut is best known for (apparently) yelling, “Damn the torpedoes, full steam ahead!” during the Battle of Mobile Bay. (Other inspirational mottoes I like: Ships in harbor are safe but that’s not what ships are for. A smooth sea never made a skillful mariner. Eat, Sleep, Conquer, Repeat.) Trust me, if ever you’re feeling daunted by anything, just say, “Damn the torpedoes!” and you’ll feel instantly up to any task. Maybe don’t yell this out in public, though.

This is the monument of William H. Webb, master shipbuilder. He built his first skiff at the age of twelve. He later designed some of the most successful sailing packets and clipper ships ever built. Later he established a profitable South American guano company, literally turning shit to gold. Finally, he built the Webb Institute for Naval Architecture, a huge school for shipbuilders — tuition free for those who couldn’t afford it. This morning, I unloaded the dishwasher. Let’s move on. 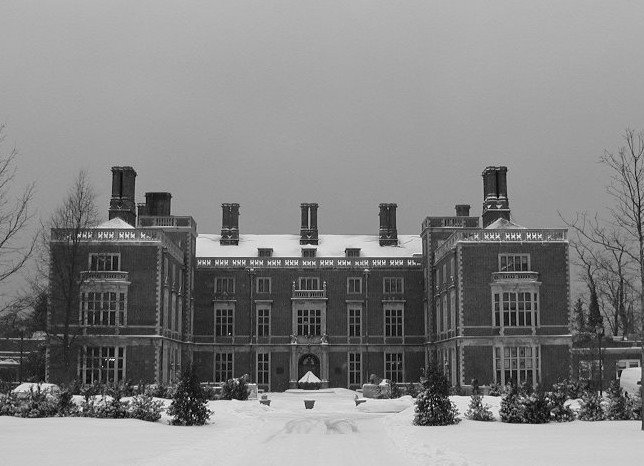 One of the best known and most romantic Titanic stories is that of Isidor and Ida Straus, otherwise known as the old couple who died side by side. Isidor Straus owned Macy’s Department Store, and he and his wife, first class passengers, chose to die together rather than be separated. When Isidor urged his beloved wife to get on a lifeboat, she refused, saying, “We have lived together for many years. Where you go, I go.” Guess who witnessed them sitting together on deck chairs when a wave washed over them? Archibald Gracie.

Here’s a picture of the Straus family mausoleum: 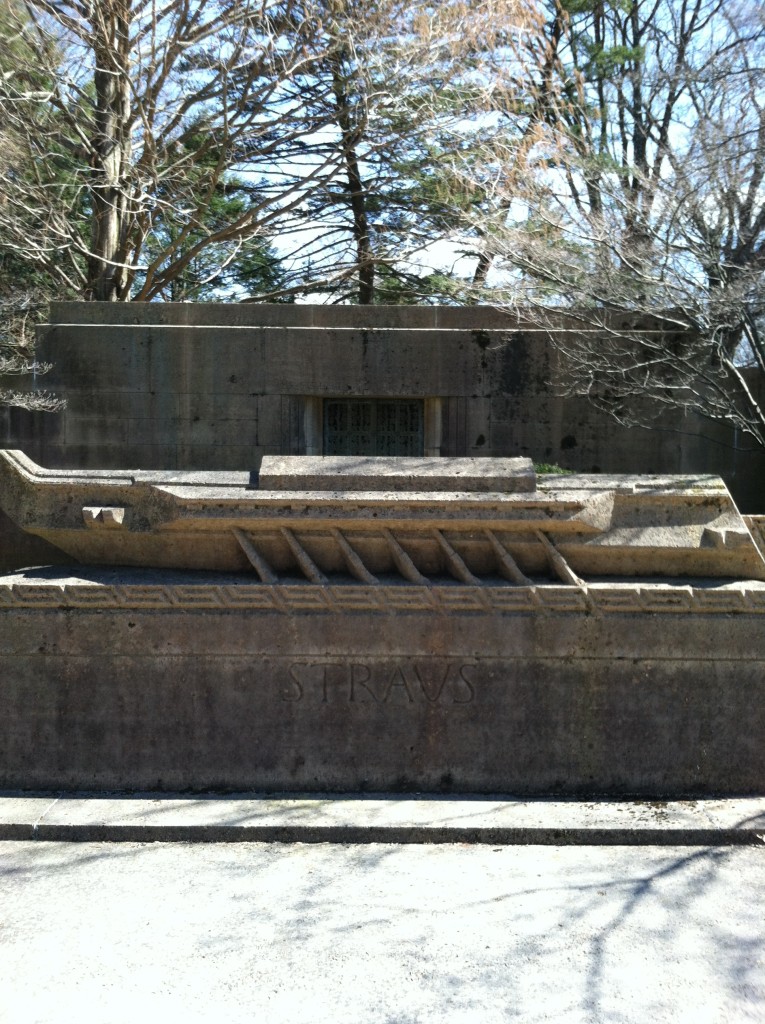 The choice of the ship is of course likely a Titanic reference, though it look more like an ancient Egyptian vessel than anything else. There is a memorial to the Srauses in Straus Park at 106th and Broadway in Manhattan, near the site of their former home. 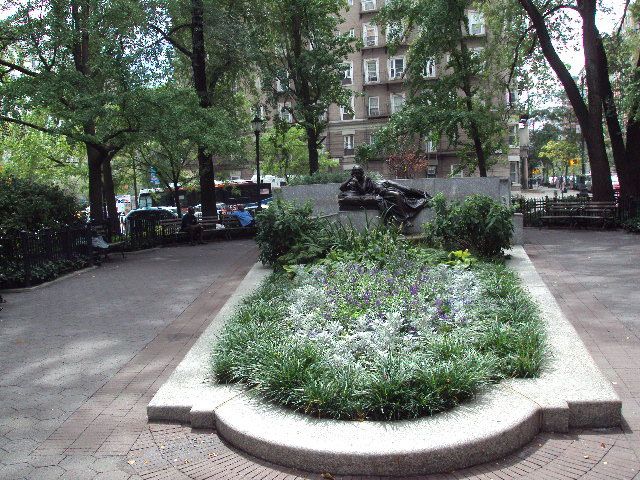 Finally, one more notable scribe among the many buried there (who are too numerous to list in one blog post) is Nellie Bly. 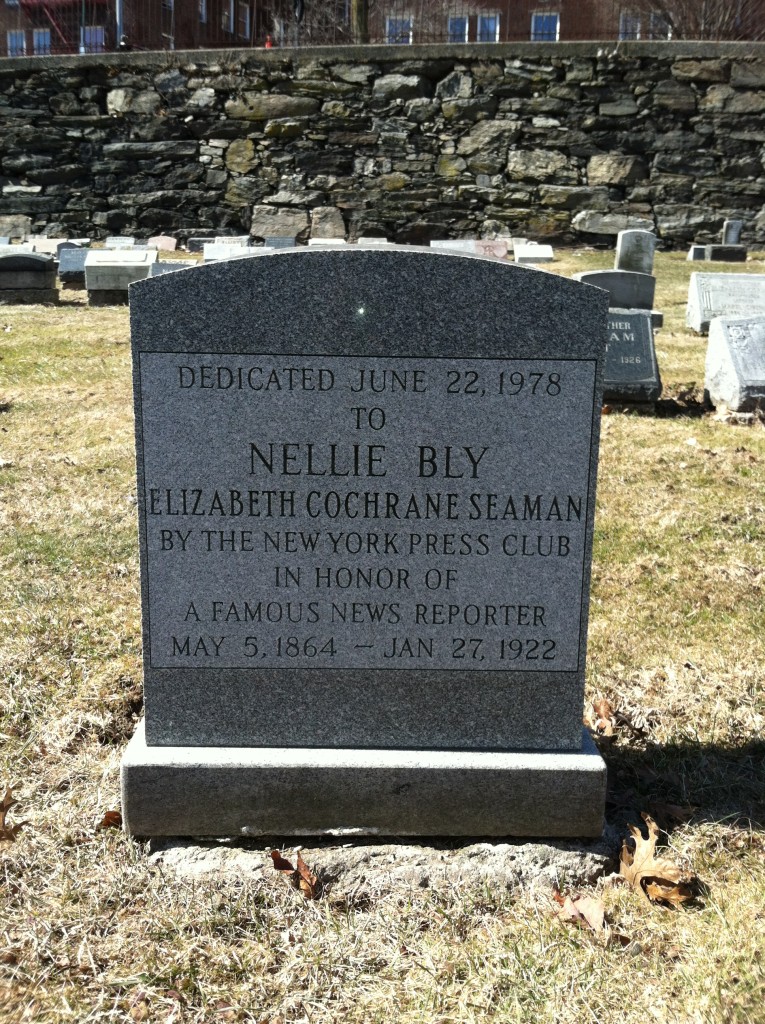 Born Elizabeth Cochran and taking the pen name Nellie Bly, she was a founder of stunt journalism, noted for her undercover investigative stories of Blackwell’s Island Women’s Lunatic Asylum and Phineas Fogg besting 72-day journey in a hot air balloon, and all around sassy gal.

Other noteworthy newsies in Woodlawn include Frank Leslie, of Frank Leslie’s Illustrated Newspaper, which I absolutely love, and cartoonist Thomas Nast, known best for his drawings of Santa Claus, the Republican elephant/Democrat donkey, and Tammany Hall’s Boss Tweed (who incidentally is buried at Green-Wood). 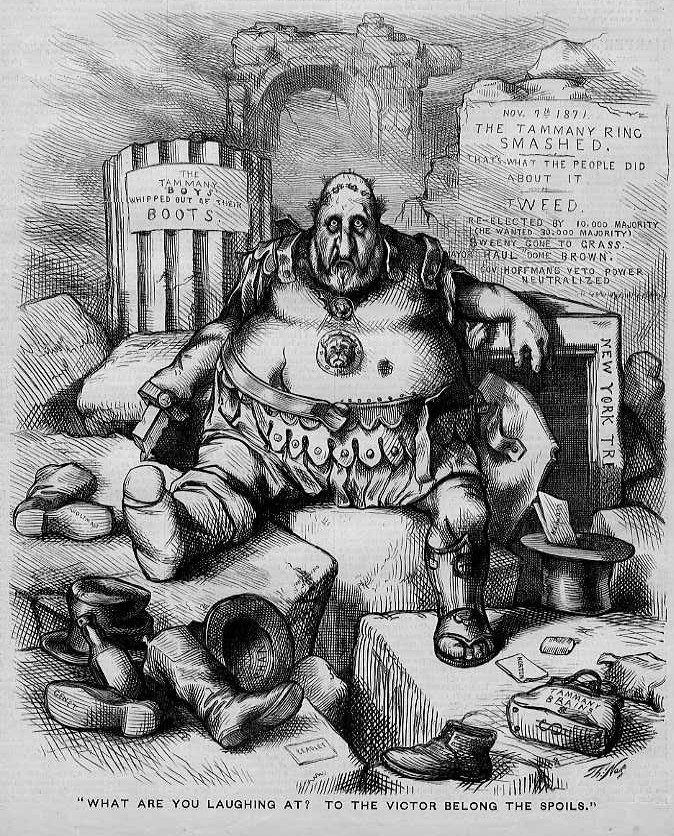