Boroughs of the Dead is excited to announce that tour guide, actress, and author Leanne Renee Hieber has joined our team! She will be leading our signature Greenwich Village and West Village tours, and she is also the mastermind behind our brand new tour, The Magic and Mysticism of Central Park. Get to know our fabulous new guide, her wonderful Gothic YA romances, and her love of that masterwork of landscape architecture, Central Park. 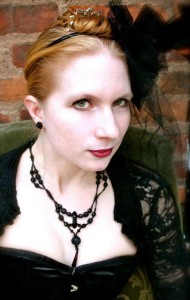 1. How did you get into leading tours of NYC?

‎I’ve been a part-time tour guide in every city I’ve ever lived in. As a fan of history, a writer, an actress, a storyteller by trade, training and calling, the job is a natural fit. When I came to NYC I was working several different freelance jobs that had flexibility enough for my theatrical pursuits but none that were really right for me, a co-worker started working for the big red tour buses and convinced me I should start there too, so I studied hard for a Tour Guide license and started working on the buses. But the buses don’t allow for the kinds of on-the-ground details and specialized themes that a company like Boroughs of the Dead provides. I love the broad picture of New York but I’m at a point in my career where I want to specialize, I want the tours I give to directly reflect my specific interests and knowledge base.

2. Tell us a little bit about your background.

I grew up in rural Ohio and some of my most formative memories are of telling ghost stories to my girl scout troupe – (I’ve always enjoyed both telling stories and scaring people.) I am a classically trained actress who was writing fantastical fiction from the moment I could put pen to paper and finish a sentence. I moved to New York nearly 10 years ago to pursue both my callings as a novelist and as an actress, and I am blessed to say I am doing both consistently, I work in film and television (proud member of performers unions AEA and SAG-AFTRA) and have 7 published novels to my name and 7 upcoming contracted with Tor/Forge, an imprint of Macmillan. I’ve carved out a career doing exactly what I love, and that’s a real joy.

3. How does living in NYC influence your writing?

Being a tour guide and learning the history of the city, especially in my focus area of Victorian New York, directly influenced both my Magic Most Foul saga and my upcoming Eterna Files saga just by being a foundational support and beautiful, dynamic backdrop for the fantastical stories I layer over top of NYC’s incredible patchwork quilt of fascinating architecture, characters, conflicts and triumphs. This city is a piece of literature unfolding day by day, a dynamic city where the history is never dead, a place of constant reinvention, evolution and surging energy. It’s a muse.

4. What is your favorite strange, dark, or unusual spot in NYC?

I’m very much a fan of Trinity Church’s little graveyard at the mouth of Wall Street. I’ve set several scenes in my upcoming Eterna Files novel in that graveyard, from the fascinating and important persons buried there to the juxtaposition of it’s old Gothic beauty amidst the Financial district so focused on modern profits and constant transactions, I find it a bit of a fitting ‘you can’t take it with you’ reminder.

5. If you had entered a time slip and found yourself in NYC in another era, where would you want to be?

1880s and 1890’s in the Dakota Building. The Victorian era is where all of my novels are set, I’m drawn to the grandeur and elegance of the era, as well as the stirrings of all the social justice causes we’ve championed in our modern era. It was a time of great advancements and great conflicts too, of repression and progress, and that push and pull of a nearly bipolar era is a source of endless fascination to me. The Dakota is simply Gothic and stunning, my favourite kind of architecture. And overlooking the park? Nowhere I’d rather be. So it’s good we’re starting the tour with that building in our sights.

6. What do you think makes Central Park such a powerful draw for tourists and New Yorkers alike? Do you think we’re just starved for greenery, or is there something more to it?

It is an utterly magical space in countless ways. On the material side, it is the most elaborate man-made park ever attempted. The innumerable truly herculean efforts made to create a vast oasis in one of the world’s most bustling metropolis still astound me and I’ve been talking about them to natives and tourists alike for nearly a decade. There are mystical elements of the park I look forward to helping unfold for my guests. Olmsted’s vision of the park was for it to be a transformative space, and it is; a park for ‘the people’, a gift to the city from the city, I doubt any green space in the world is quite so treasured by so many. To me, Central Park is the lush, verdant, vital heart of the city.

7. Can you give us a sneak-preview of one of the special things people will see on the Magic and Mysticism of Central Park tour?

My favourite place on earth: The Bethesda Terrace. A lot of New Yorkers and visitors know this beautiful space and its exquisite Angel of the Waters very well. But some of the reasons why it’s so richly meaningful aren’t right on the surface but embedded in history; what Central Park’s visionary designer Frederick Law Olmstead went through during the Civil War lend a resonant foundation to the terrace’s story. I want to illuminate for my guests why that breathtaking terrace isn’t only one of New York City’s crown jewels, but a place of symbolic healing and literal transcendence.

Buy tickets to her Magic and Mysticism of Central Park tour!