Q&A With Paul Collins, Author of The Fever Called Living 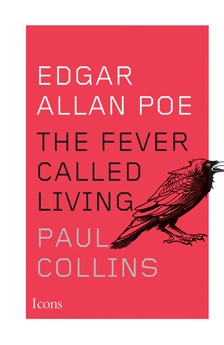 This autumn, fans have been lucky enough to see the release of two great new books on Edgar Allan Poe.* The first of these, The Fever Called Living, has rapidly become my most recommended resource for anyone out there looking for a really solid and straightforward Poe biography. In an astonishing 107 pages, Paul Collins has written a pared down book that is exceptionally clear, concise and free from so much of the histrionics and pop psychology that drives me nuts in so many books about Poe. It’s a graceful and restrained work of scholarship that provides the perfect entry point for newcomers to Poe-ania, and a handy resource for those in need of a quick refresher. Put it alongside Arthur Hobson Quinn on your bookshelf, and you can’t go wrong.

Paul Collins was kind enough to answer a few of my burning questions about Poe and The Fever Called Living. You can buy a copy on Amazon or Powells, and follow Paul on Twitter. If you’re in New York on October 30th, you can catch Collins at The Center for Fiction where he’ll discuss the life and works of Poe.

1) What is the most egregious Poe myth you would like to see dismantled?

That he can be understood through his work, which I find a narrow view of art, and one that simply rings untrue to most working artists. I do think the reverse is true: that by knowing about his life, that one may better see the context of his work.

2) On the flip side, what is the #1 thing you would like people to know about Poe’s life and/or personality?

That an artist doesn’t get that good on raw talent alone. Poe was a painstaking craftsman – a critic and editor who worked with other people’s words as much as his own – and he developed his great abilities slowly, through many false starts and half-successful pieces before hitting upon the pieces that we all know about today.

3) Distilling the facts of Poe’s life into 107 pages is quite a feat. How did you decide what to leave out?

I largely stuck to engaging with primary sources – with the evidence of that time — rather than the subsequent interpretations of it. That eliminates a surprising amount of stuff, all these layers of lore and secondary commentary that have accumulated since then.

And though I certainly gave a bit more space to the more narratively compelling moments – his arrival in Manhattan, for instance, or his delirious meeting with George Lippard in Philadelphia – I really tried to weight the different stretches of his career relatively equally, so that the full context of his work comes through.

4) In that same vein, I noticed you included the first few lines ever committed to paper that could be attributed to Poe: his remarks made during a childhood sail to England, as dictated to John Allan (“Say something for me Pa, say I wasn’t afraid coming across the sea?” (p. 5)) Why did you include six-year-old Poe’s childhood impressions as he sailed to England?

To remind readers that, well, even Edgar Allan Poe was a kid once. Before he became the Great American Writer, he was an American kid (and for a while, a British kid), and then an adolescent struggling to make his way through the kind of jobs anybody might land when they’ve dropped out of college and been kicked out of the house.

But part of that section, too, was to reinforce the impression that living in Europe made on the young Poe. His sensibility is both a European and an American one, without being entirely of either; it’s part of what informs his settings and his diction, and what makes him such a curious figure among his contemporaries.

5) Which of Poe’s underrated or lesser known stories or poems do you think deserves to be read more widely?

I’d forgotten just how good “Ulalume” is, especially aloud.   It’s more hypnotic and unsettlingly indistinct than much of his other poetry, and in a curious way, a bit more modern in that regard.

6) I’m a big fan of the series Poe wrote for the Columbia Spy in 1844, Doings of Gotham. Are there any non-fiction articles by Poe that you’d like to see more people reading?

Well, I don’t know if it’d have the same meaning for others, but I’m rather fond of “Morning on the Wissahiccon.” We don’t normally think of Poe as a nature writer, but it reveals a direction he might have gone in, had he chosen to. Also, I grew up in Montgomery County, not so very far from that creek, so when I first starting reading Poe it was startling to come across that.

7) Is there any mystery about Poe’s life that you’ve never been able to clear up despite all your research, and would really love to? Anything you would love to ask him if you had the chance?

Oh yes – whether his fiction debut actually happened at the age of 18, with some short stories in the North American magazine. They were published under his brother’s initials, but Edgar was hiding from creditors at the time, and they read awfully like an 18-year old Poe might. I’ve made my own educated guess in a New Yorker piece, but short of finding a letter or a diary in someone’s attic, I suppose we may never know for sure.

8) What do you think of the scandal involving Elizabeth Ellet, Griswold, and Frances Sargeant Osgood? Do you give any credence to the rumors that he was ever romantically involved with Osgood?

I didn’t give it that much thought, really, as the prospect of understanding him or his work through one spat seemed unlikely. The people he lived with day to day, and the jobs he worked in week by week, were really what felt like the routes for achieving that.

9) Despite the number of years he lived here, I find many people generally don’t think of New York City and Poe together in the way they think of, for example, Baltimore. Do you consider New York City to be a significant Poe city?

Very much so! As Poe did himself. His greatest professional success came there, with The Raven; so did his most heartbreaking failure, the collapse of the Broadway Journal, which wound up being his one (short-lived) chance to run his own magazine. New York was where Poe, like so many other people, went to reinvent himself, and to begin his career again.

10) If you were ever going to write one more book about Poe, concentrating only on one aspect of or episode in his life, which would you choose to explore in further depth?

Probably from The Raven up through his one and only magazine falling to pieces; that year was real roller coaster ride through literary fame and misfortune.

* Stay tuned for part two of my Poe-centric blog posts, a Q&A with J.W. Ocker, author of Poe-Land, which I’ll post on October 3rd!