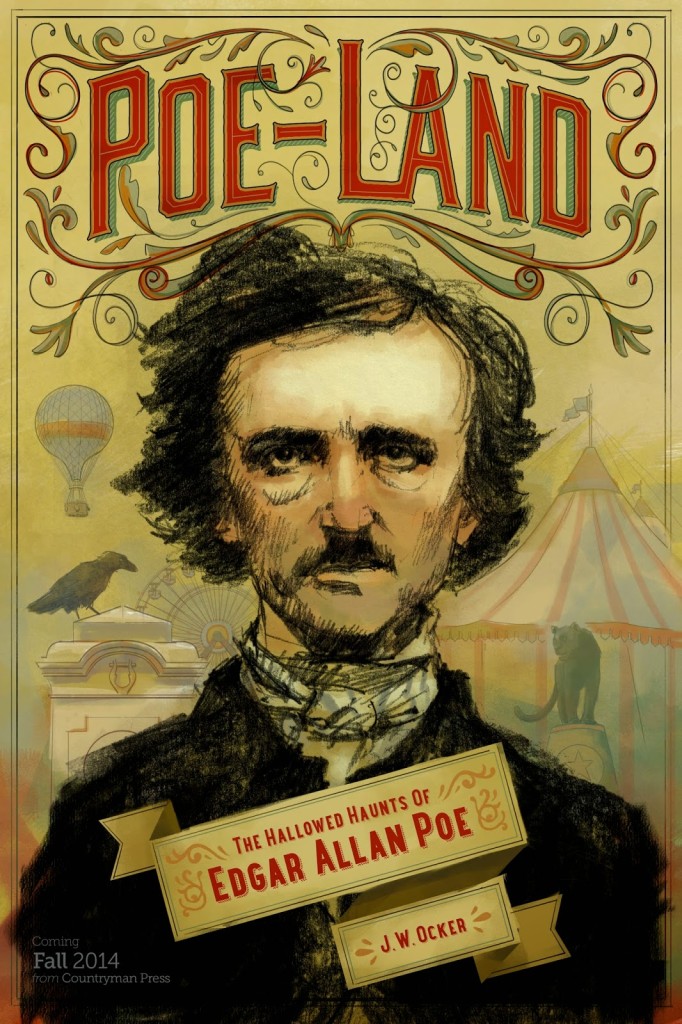 J.W. Ocker’s Poe Land is pure fandom fun. Structured like a road trip from Boston to South Carolina, this engaging travelogue meets up with collectors, enthusiasts, actors, and scholars, to form a fascinating picture of the people who keep Poe’s legacy alive.

I must admit that, initially, I wasn’t crazy about the fact that the author professed to embrace the Poe Myth – the reeling, mad, tortured soul – because I’ve got a problem with the impoverished writer thing (pay us, god damn you!). But a few days after reading the book, I paid a visit to the Susan Jaffe Tane Poe collection at the Grolier Club in New York. There were two exhibits on, Poe and Seamus Heaney. In the Poe room, a cluster of visitors crowded around the display case labeled The Death of Poe. The Heaney room was empty.

Whatever your take on Poe, this book reminds you that his legacy is vitally present in every city in which he lived, and in the minds of anyone anywhere who’s ever read a book or a comic or watched a movie or a TV show, pretty much ever. Who else can claim that kind of influence? Very few artists, indeed. (And the multiple display cases at the Grolier exhibit dedicated to his influence on other writers, artists, musicians and filmmakers proves Poe was the consummate artist’s artist.)

Poe Land is at its best when Ocker meets up with collectors and enthusiasts, who share intensely joyous moments of sheer geekery. These moments even transcend Poe himself – in Providence, Ocker meets up with a crowd of Lovecraft enthusiasts who trace a line from H.P. to Poe; in Philly he meets up with Edward G. Pettit, and suddenly the reader becomes intensely interested in George Lippard. But the absolute highlights come when Ocker indulges in his obsessive nature with fellow obsessives, namely the great collectors of Poe: Susan Jaffe Tane and Peter Fawn. Ocker has a kid-in-a-candy-shop moment with the affable and generous Fawn, who makes collecting seem less like an act of hoarding than one of immeasurable sharing.

I talked in more detail with Ocker about Poe Land, and the year-long journey he took into the dark heart of Poe:

I’m not sure when I was first introduced to Poe—I feel like he’s always loomed over my shoulder—but I remember discovering “The Raven” in my early teens. My parents gave me a set of college lit textbooks from the 1970s. Still have them. “The Raven” was in there. I was immediately compelled to memorize it. I wanted it always at hand, always on the tip of my tongue, always in mind. Still feel that way. I want to live in that poem…and you kind of can, you just need some velvet wheeled cushions, a bust of Pallas, some quaint and curious volumes of forgotten lore. Ha. “The Raven” as interior design guide. Poe did write an essay about interior design, so that’s not too far-fetched, I reckon.

2. I want to talk about Poe in New York. What do you think is the most important thing that connects Poe to New York City?

Without a doubt it’s the Poe House in the Bronx. It’s the last house he lived in, the house where his wife Virginia died, the last place he was part of a family. It holds a few artifacts from his life, including what’s purported to be Virginia’s deathbed. The historical society has done a good job of maintaining it, and it’s the centerpiece of a whole, albeit small and extremely urban, park. The humble little house just gets lost in the New York noise is all.

3. In the book, you talk about Poe in terms of the “man, the myth, and the monster,” and confess that you rather like the Poe myth. I tend to get quite caught up in myth-busting on my tours of Poe, however, mostly because there’s a lot of nonsense floating around New York City — mostly propagated by other tour guides, unfortunately. What is the one Poe myth you really love and would never want to give up, and the one Poe myth you wouldn’t mind putting to rest?

The one I love most is that of the tormented writer feverishly wringing his desperate soul into morbid prose, more often than not during a thunderstorm. The reality is he probably sat with his shoes kicked off carefully constructing what he thought readers would pay for. I heard Woody Allen once say in an interview something like, “People think I’m an intellectual because of who I play in my movies, but the reality is, I just sit at home in my T-shirt drinking beer and watching baseball.” There’s usually a big difference between the creator and the creation. Still, I need that image of Poe.

The one I’d put to rest is the drug-addict myth. It goes way too far beyond what we know of Poe and, worse, overshadows the one good drug story we have of him when he tried to (or pretended to) commit suicide in Boston by overdosing on laudanum just so the married woman he was obsessed with would visit him on his death bed. The punchline on that story is he misjudged how much laudanum to ingest and just ended up getting sick for a few days and never mailed the entreaty to the woman.

I love it. I mean, I think I do. Keeps him alive. Takes a bit of his soul away in the process, but that’s what souls are for, I guess. Oddly enough, because of that all that marketing and commoditization, Poe becomes a person to us. We know his face. We see him when we read his work. We have an impression of who he was (even if it is just the Myth). But every time he pops up in pop culture, that’s an opportunity for somebody new to be introduced to his work and it gives those of us steeped in it the excuse to revisit it. And that combats the downside of marketing Poe. I hope.

5. It seems you wrote much of the book under a tight deadline. I even got the impression in the Great Britain section that you flew to England for a weekend. Did I read that right? If so, are you actually mad and/or suicidal or were there other mitigating factors?

I did exactly that. I think I’m still jet lagged from the UK experience. But it was completely worth it to meet Peter Fawn and see his collection. It ended up being my favorite experience in the book, finding myself an ocean away from Poe’s and my home country and still finding traces of him not just on the cityscape, but in the form of this wonderfully obsessed collector who has this bond with Poe that I can only envy and who I now count as a friend. Well worth crossing the Atlantic twice in a weekend.

6. What was your biggest challenge while writing Poe-Land?

Time. I would have loved to do more interviews, attend more events, revisit someo f the sites. But I only had about a year. Still, I stuffed that year so full of Poe, that to this day I can’t make the math add up for how I saw everything I did, talked to everyone I did, and still lived my normal life of work and Cartoon Network shows. Still, the book is a complete journey—I just would’ve just loved a few more detours in it. I’d probably have said that, though, if the book was twice as long.

7. Why did you choose to order the chapters as you did? Was it determined by geography, or did it correspond to the order in which you wrote them?

Geography. I though of it as a giant road trip, because I love road trips, one that started in Boston and wended down to South Carolina. Of course, it was actually multiple road trips and some flights, plus a detour to England. But I thought that the continuous geographical space could help frame his life in an interesting way.

8. Sometimes, there is an idea that one “outgrows” Poe and moves on to more “serious” literature. I personally like that a lot of what he wrote is flawed, because it presents, to me, a portrait of a working writer on deadline. Can you speak to this idea that Poe is still somehow considered slightly disreputable or juvenile among American writers?

There’s that great T.S. Eliot quote, “That Poe had a powerful intellect is undeniable: but it seems to me the intellect of a highly gifted young person before puberty.” There’s something true in that, I think, but it also misses certain things. I think some people consider him “slightly disreputable or juvenile” for a couple reasons. One is that everybody kind of gets Poe to some extent. So for those with elitist bents, that rankles a bit, so it’s more comfortable for them to assume Poe’s work shouldn’t be up there with the Great Works of Humanity.

But mostly, we consider works to be literary if they dissect humanity, searching out what it means to be human and alive in the universe and to have a navel we can all stare lovingly into. Poe, if his work is any indication, could’ve cared less about that. He was chasing unified effects, moments of unbroken and intense feeling, all unsullied by contrivances like meaning and morals. To find that exercise juvenile or less artistic than a 600-page literary novel full of human insights that boil down to “being human is weird” is to have a painfully constrained view of art. Basically, Poe’s work is great. Enough of it, anyway.

9. Poe fans often end up changing lanes and getting into someone else or something else as a result of studying Poe, whether it’s Lippard, Baudelaire, or another writer. Did Poe lead you to become interested in any other writers or historical figures?

You know, I’m still in that Poe glow, still overpoweringly drawn to him. I thought the book would exorcise Poe from me a little. Take his beak from out my heart, so to speak, but he’s still…there. Never flitting, I guess. That said, Poe’s colleague, enemy, literary executive, and the man most responsible for the Myth of Poe, Rufus Griswold, grew more interesting to me as I wrote Poe-Land. He doesn’t appear much in the book because there aren’t physical traces of him left behind like Poe. But, as you read in the Massachusetts section, where Rob Velella, a Poe performer and creator of the American Literary Blog (http://americanliteraryblog.blogspot.com/) schools me on the guy, Griswold seems “more Poe than Poe” due to some strange occurrences in his life. As to writers who are often brought up in the same sentence with Poe, I could easily see myself becoming infatuated with Nathaniel Hawthorne. I love “Ethan Brand” and “The Birth-Mark,” and Hawthorne has a large physical legacy in Salem and other areas of Massachusetts worth exploring.

Washington Irving’s another guy I would love to delve more into, both for his work and for his physical legacy in Sleepy Hollow, New York, and elsewhere. Would be a much different book, of course and “Irving-Land” doesn’t have the same ring.