This is the second half of a guest post written by Lisa Lideks, who runs the blog The World of Edgar Allan Poe. An authority on Poe who is devoted to separating truth and fiction, Ms. Lideks gives us the lowdown on some of his lesser-known years in Gotham. Last we heard, he was living with his wife and mother-in-law/aunt in Greenwich Village and struggling to make ends meet as a writer. Did he succeed? Find out, below! 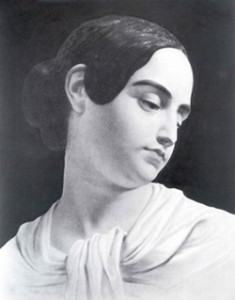 For eight months, the Poe family shared their lodgings with William Gowans, an eccentric, though kindly, bookseller.  In 1870, Gowans published a brief, charming reminiscence of the Poe household that gives the fullest information we have of this period in the poet’s life.  Gowans spent a good deal of his account extolling Virginia Poe’s “matchless beauty and loveliness,” as well as her “temper and disposition of surpassing sweetness.”  (In a revealing comment about the Poe marriage, he added that she was as devoted to her husband “as a young mother is to her first born.”)

As for Poe himself, Gowans never saw the poet intoxicated, or guilty of any other vice, and that he “was one of the most courteous, gentlemanly, and intelligent companions I have met.”  Gowans noted that “The characters drawn of Poe by his various biographers and critics may with safety be pronounced an excess of exaggeration, but this is not to be much wondered at, when it is taken into consideration that these men were rivals either as poets or prose writers, and it is well that such are generally as jealous of each other as are the ladies who are handsome, or those who desire to be considered possessed of the coveted quality.”

Gowans commented that during this period Poe was completing “The Narrative of Arthur Gordon Pym.”  This would prove to be the most significant achievement of Poe’s early New York stay.  Harper & Brothers took out a copyright on the novel in June of 1837, but it was not published until a year later.  (This unexplained delay was probably related to the bleak financial times.)

Another short glimpse of Poe in 1830s New York comes from his attendance at the Booksellers Dinner held at the City Hotel in March 1837, an event which drew many of the major literary figures of the time. The newspapers of the time record him as offering a brief toast:  “The Monthlies of Gotham—Their distinguished Editors, and their vigorous Collaborateurs.”

Sometime in the early spring of 1837, the Poe household moved to 113 ½ Carmine Street.  St. John’s graveyard was nearby, and it is said that Poe and his wife enjoyed walks through the tree-lined quiet of the cemetery.  During this period, Poe published a review of John L. Stephens’ “Incidents of Travel in Egypt, Arabia Petraea, and the Holy Land” in the October “New York Review.”  “American Monthly Magazine” carried “Von Jung, the Mystic” in their June issue. “Siope—a Fable” appeared in the “Baltimore Book” for 1838.

There is no record of Poe publishing anything else during this time, although it is possible he did some sort of literary hack work that appeared anonymously.  It is a mystery how he and his family survived.  There are practically no letters to or from him during this period, and mentions of him in the contemporary correspondence of others are equally lacking.  As far as history records, during Poe’s first New York stay he may as well have been on the dark side of the moon.

There is a very curious footnote to his year in the city.  In June 1846, Thomas Dunn English, with whom Poe was carrying on the noisiest of public feuds, published a column where he made an offhand reference that “the ‘Tombs,’ of New York, has probably a dim remembrance of [Poe’s] person.”

English did not elaborate on this startling charge, and Poe made no known response to this allegation that he did a stint in a New York prison.  It has been equally ignored by his biographers.  English generally had a strained relationship with the truth, particularly where Poe was concerned, so it is quite possible that he simply engaged in a bit of libelous exaggeration.  Is it possible, however, that during Poe’s first stay in New York City, he was briefly imprisoned—perhaps for debt?  Could that help explain the lack of information during that part of his history?  No one knows.

In any case, it is sadly certain that Poe’s early attempt to make his fortune in Gotham was a harrowing experience.  Sometime in the early part of 1838, he gave up on the Big Apple and moved his little family to Philadelphia.  In July of that year, he wrote to the Secretary of the Navy asking for some sort of government work.  It is a letter of pure despair:  “Could I obtain the most unimportant Clerkship in your gift—any thing, by sea or land—to relieve me from the miserable life of literary drudgery to which I now, with a breaking heart, submit…I would never again repine at any dispensation of God.”

Unfortunately, whether he lived in New York, Philadelphia, Richmond, or Baltimore, Poe was always given many reasons for repining.

Loved this post? Can’t get enough of Poe in New York City? Why, it just so happens I’m leading a walking tour of Greenwich Village on January 19th to honor that very thing! If you’re in NYC and interested in taking tour, please email me for tickets and info.