The following is the first half of a guest post written by Lisa Lideks, who runs the blog The World of Edgar Allan Poe. An authority on Poe who is devoted to separating truth and fiction, Ms. Lideks gives us the lowdown on some of his lesser-known years in Gotham. Check back tomorrow for the second half of this post. 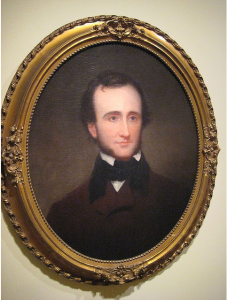 Poe spent the last five years of his life living in the New York City area, and this period is the most important and well-known of his life.  “The Raven” was published.  He acquired (and lost) the “Broadway Journal,” which proved to be his one opportunity to run his own literary magazine.  He became embroiled in social and professional scandals that haunt his reputation to this day.  His wife Virginia died.  He wrote his magnum opus, “Eureka.”  Finally, in October of 1849, a New York paper, Horace Greeley’s “Daily Tribune,” commissioned Rufus W. Griswold to write what would prove to be one of history’s most infamous obituaries.

In contrast, his earlier sojourn in New York City, from 1837-38, is the most poorly-documented year of his adult life, and goes largely ignored.  “The Poe Log,” that painstaking documentary record, took over 350 pages to cover his years in New York from 1844-49.  By contrast, this same book summarized his first residence in that city in just four pages.  Still, that period is not without its own significance, if only as grim tribute to the peculiarly star-crossed nature of Poe’s career.

In January 1837, Poe officially “retired” as editor of the “Southern Literary Messenger,” a monthly based in Richmond, Virginia.  The magazine’s proprietor Thomas W. White fired Poe ostensibly for his occasional lapses in sobriety, but the dismissal largely came about through the fractious professional relations between the two men.  White resented Poe’s attempts to gain editorial control over the magazine, not to mention his increasingly obvious disdain for his employer.  Late in December 1836, White grumbled to his confidante Beverley Tucker:  “I am cramped by [Poe] in the exercise of my own judgment, as to what articles I shall or shall not admit into my work. It is true that I neither have his sagacity, nor his learning–but I do believe I know a handspike from a saw. Be that as it may, however,–and let me even be a jackass, as I dare say I am in his estimation, I will again throw myself on my own resources…”

A man may be as sober as ten thousand angels, but if his boss catches on that this employee thinks of him as a jackass, it’s safe to say said employee’s days on the job are numbered.

Poe was equally ready to leave a job he had come to see as confining, particularly as he had far more congenial employment in view.  Early in 1837, Francis Lister Hawks, who was about to launch the “New York Review,” asked Poe to join his journal:  “I wish you to fall in with your broad-axe amidst this miserable literary trash which surrounds us.  I believe you have the will, and I know well you have the ability.”

Poe most certainly had both.  By early February, he, his fourteen year old bride of less than a year, and his aunt/mother-in-law Maria Clemm arrived in New York City to start what they undoubtedly assumed was a prosperous new life.  They settled in at a residence at Sixth Avenue and Waverley Place.  Unfortunately, as was generally the case with Poe, “unmerciful Disaster followed fast and followed faster.”  His move to New York coincided neatly with the “Panic of 1837,” which launched one of the biggest financial depressions in American history.  The “New York Review,” along with many other publications, struggled only to soon sink without a trace.  The entire literary industry was crippled by the nationwide economic collapse.  It was the worst possible time for a young writer, however gifted, to build a career…

What will happen to young Edgar? Will he triumph? Or will his dreams be shattered? Find out tomorrow!