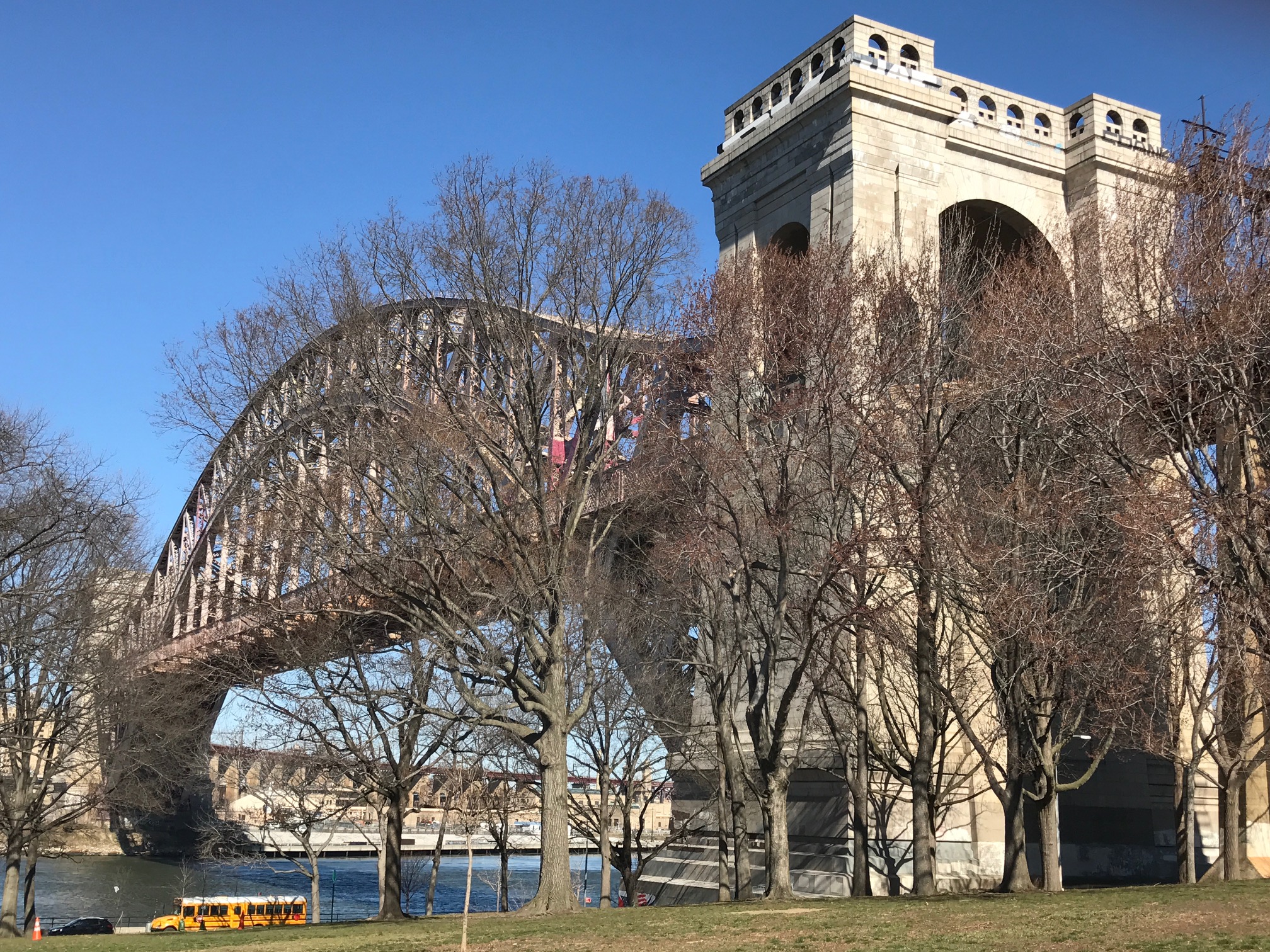 The following is a guest post written by our tour guide Marie Carter.

The Hell Gate Bridge is currently celebrating various anniversaries right now. It was completed on September 30, 1916. On March 9, 1917, the first Pennsylvania Railroad train—the Federal Express service between Washington and Boston—went over the Hell Gate Bridge, completing the first uninterrupted rail service between the two cities. The first passenger train crossed the bridge on April 1, 1917. Of course all these landmark dates means there’s a lot of celebrating going on in Astoria right now. On March 9, 2017, gorgeous murals at the base of the stone pier on the Astoria Park side, were completed. The Greater Astoria Historical Society is having a series of events which recently included a talk with the “Bridge Man” Dave Frieder, an exceedingly brave man with twenty years of gymnastics training, who has climbed the Hell Gate Bridge and photographed it. There was also a talk with historian and author, Jason A. Santos, at QED. www.qedastoria.com.

As those of you have taken the tour Haunting Histories and Legends of Astoria know, we like to stop near the bridge and examine some of the more obscure and macabre stories concerning the bridge. The word Hell Gate is Dutch in its origins. Originally, the body of water to the west of Astoria Park was named Hellegat which is often translated as meaning “Bright Passage.”

However, Dutch is Germanic in origin so it could also be translated as “Hell Hole” which is a much more appropriate name for the hellish waters. When the British came along and took over in 1654 this name was Anglicized to Hell Gate.

This body of water was known for eddies and whirlpools. There were depressions found in the bottom of the water which formed enormous cauldron-like formations known as “pots.” At the QED talk, Jason showed a map from the 1800s of all the rocks that use to populate the Hell Gate. They were glacier-like in their formation and had funny and quirky names like Bald Headed Billy, Bread and Cheese, and Hens and Chickens.

During the 1850s, an average of 1,000 ships a year were damaged or sunk in the Hell Gate. By 1873, there was an estimated one million dollars of property damage a year because of the Hell Gate. One story involves an 1879 expedition in which a British sink, filled with 200lbs of gold, sunk. Remnants of the ship were found, but not the gold. Local legend has it that if you hear a train thundering over the tracks of the Hell Gate in the wee small hours of the morning and it stops in the middle of the bridge, it means that the train is letting off the ghosts of all the explorers who lost their lives in the waters of the Hell Gate. 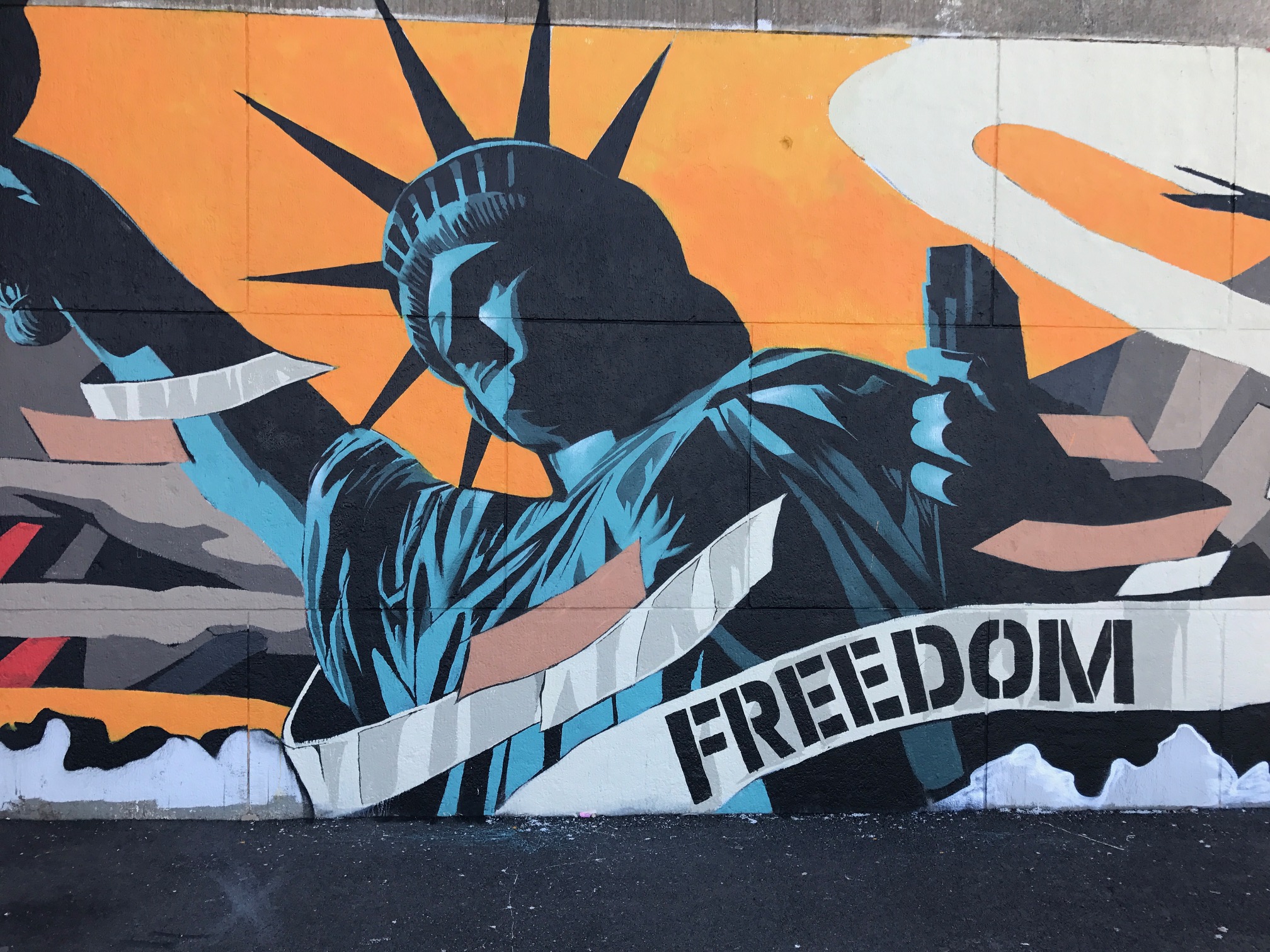 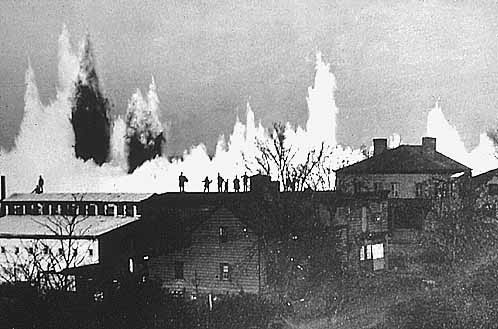 By 1885, there was a decision that these waters had to be tamed. The US Army Corps of Engineers blasted out the underwater rocks in the 1870s and 1880s, in explosions that were surpassed in magnitude only by the atomic bomb. Take that Bald Headed Billy. Except even these explosions were not enough to completely remove the rocks. The Army Corps had to hand-remove the remains.

During World War II, the bridge became essential for transporting weapons. Having received word of the importance of the Hell Gate Bridge, the Nazis sent in a team of saboteurs to the U.S. in U-boats to destroy the bridge. One group came ashore in the predawn hours of June 13, 1942, near Amagansett.

They were apprehended by the Coastguard John Cullen, but Cullen was unarmed so he couldn’t detain them though, at first opportunity, he did report the siting of the group to his superiors, and a manhunt for the group began. The group got on the last train into Manhattan and found a hotel in Penn Station to spend the night. The leader of the group, George Dasch, lost his nerve and turned himself and his team, in.

The FBI arrested the rest of the group; they were all later electrocuted, but George Dasch got a commuted sentence and was sent back to Germany. However, he was now a traitor, and the Germans wouldn’t take him back. He spent the rest of his years living on the American side of the Berlin Wall until it was knocked down in 1989. George Dasch died at the age of 89 in 1992.

A recent article in New York Times on the Hell Gate Bridge quoting Astoria resident Antoni Meloni mentioned that if zombies attack, he’s going to the Hell Gate. Having quasi-legally been inside the base of the stone pier, he says, “It looks like an old castle. There’s a room that is seven, eight stories high…. And the view is fantastic.”

He might not be wrong. If human beings were to be wiped on out in an apocalypse and the bridges received no maintenance, experts estimate that the New York City bridges would only survive for 100 to 300 years before eroding into dust. The Hell Gate Bridge would survive for a 1,000 years.