We’re excited to present the follow Guest Post by our brand new guide, Marie Carter.  Marie grew up in Scotland near Edinburgh, a city bubbling with ghost stories. Her father was a bus tour guide in Edinburgh and he would often drive her around town quizzing her on historical facts. She now lives in Astoria, Queens and is extremely excited to be sharing dark and ghoulish historical stories with Boroughs of the Dead. She’s the author of The Trapeze Diaries which is based on her experiences of learning trapeze and the editor Word Jig: New Fiction from Scotland. 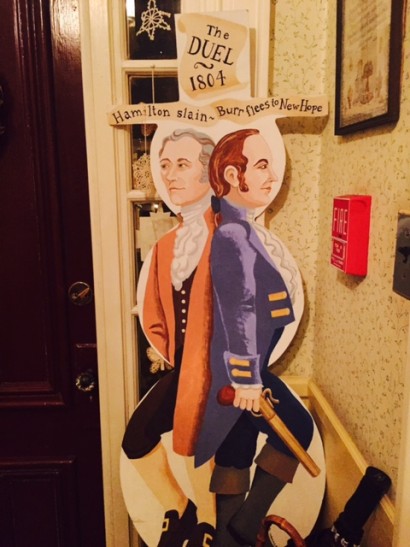 An hour and a half bus ride from New York City on Transbridge Line is the beautiful and historic town of New Hope, PA. Around October/November, the town kicks off its annual ghost walking tours, and the small town is hopping with them.

While visiting New Hope, I stayed at the Aaron Burr House, a bed and breakfast which is said to have once housed Aaron Burr for a week after he was on the run following his famous 1804 duel with Alexander Hamilton. The bed and breakfast is also rumored to be haunted by Aaron Burr. He’s been spotted roaming the house, peering around corners, and people claim they have even seen his specter around town, anxiously watching his back as if he’s being followed. For those more into material history than spectral, you can also enjoy the B&B’s small but fascinating collection of dueling pistols from Aaron Burr’s era.

The bed and breakfast is owned by the same people who run the Wedgwood Inn, a charming homage to Wedgwood pottery. But don’t let the delicate pottery fool you: there are spirits afoot here, too. The owners found an escape tunnel underneath the gazebo, which they believe was a stop on the Underground Railroad. This house is said to be haunted by a 12-year-old escaped slave called Sarah, who guests claim they hear scratching the walls inside a hidden staircase that leads to the tunnel. Sarah has also apparently appeared to young girls her own age. 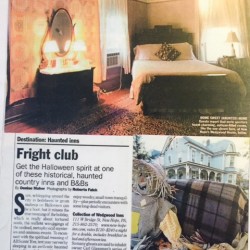 …and they’re not afraid to let you know it.

Five minutes further down the road is the historic Logan Inn, built in 1722. Guests have reported feeling a chilly presence in room number six, and claim they feel as though they can’t breathe when they walk into the room. Guests have also reported seeing a tall Revolutionary soldier, which kind of makes sense. Apparently, the Logan Inn was a stop for General Lord Sterling as his army passed through New Hope. His troops camped out there and left their dead in the cellar. Since the ground was frozen, the corpses couldn’t be buried until spring.

Directly across from the Logan Inn is Farley’s Bookshop, which stocks a couple of books on New Hope’s ghosts. Farley’s is rumored to also be haunted. Some of the staff have reported seeing ghostly figures in period clothing.

Can’t wait until October to hear about the ghosts? The town also offers free historic walking tours at 1:30 pm on Saturdays and Sundays just outside the Parry Mansion. New Hope has plenty to offer in terms of historic richness with many buildings dating back to the Revolutionary War.

Can’t get enough Aaron Burr? We feel you. Check out our Weird West Village tour for more bizarre Burr goodness and our Forgotten Dark Histories of Lower Manhattan for even more colonial-era creepiness.