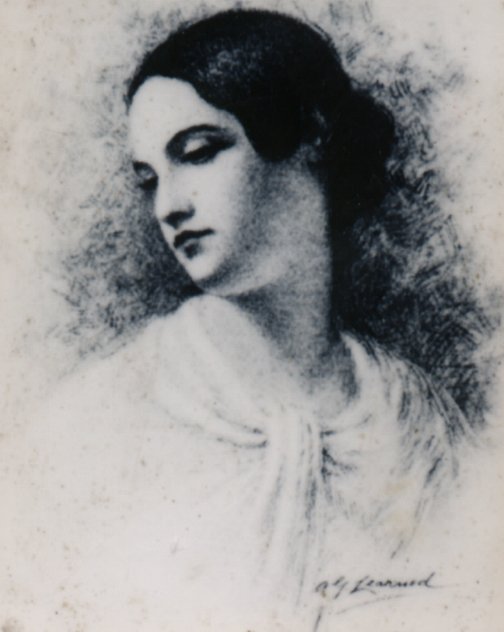 Virginia Poe was only twenty-four years old when she died, and there is not a lot about her life that is well-documented, except for that which affected her husband’s life — her tuberculosis, the dates of their marriage — so we don’t know a lot about her personality or what she was like on a day to day basis. We do know that she (and her mother, Maria Clemm) spent a lot of time taking care of Edgar: brushing his suits, cleaning his pens, sorting his papers, and of course cooking all the food and doing all the cleaning and washing around the house. Those two must have worked like drudges from sunup to sundown, and I imagine Mrs. Clemm did the lion’s share of the work as Virginia’s illness worsened toward the end of her life.

We know a bit about what she looked like: “Mrs. Poe looked very young; she had large black eyes, and a pearly whiteness of complexion, which was a perfect pallor. Her pale face, her brilliant eyes, and her raven hair gave her an unearthly look.” (Mrs. Mary Gove Nichols, “Reminiscences of Edgar Allan Poe,” reprint, p. 8). Their former lodger, William Gowans, said she was of “matchless beauty and loveliness; her eye could match that of any houri, and her face defy the genius of a Canova to imitate.”

We also know that Virginia liked to sing and play piano, an instrument which Edgar made sure always to supply despite his poverty (the macabre and infamous moment when her TB first presented happened while she was singing at the piano in their Philadelphia home in 1841) and that from time to time Edgar tutored her in algebra and played an amusing little game with her called Hop-Frog (really).

We know that, toward the end of their time in Greenwich Village, Virginia was more than ready to leave the center of the literary world and retire to a country cottage, probably because of the incessant gossip and seemingly constant presence of other women who were very interested in flirting with her husband. She wrote, in a simple acrostic poem to her husband:

Give me a cottage for my home

And a rich old cypress vine,

Removed from the world with its sin and care

And the tattling of many tongues.

There is so much speculation and rumor about the nature of their relationship, but most scholars attest that their love for each other was genuine: “That Virginia loved him, I am quite certain, for she was by far too artless to assume the appearance of an affection which she did not feel” (Lambert A. Wilmer, 1866).

There is still some speculation about whether Annabel Lee was written for Virginia, and this might be riddle that will never be solved, but it seems hard to read the following lines without imagining that they were written by Edgar Poe for the love of his life — his “life and his bride.”

And so, all the night-tide, I lie down by the side

In her sepulchre there by the sea —

In her tomb by the sounding sea.