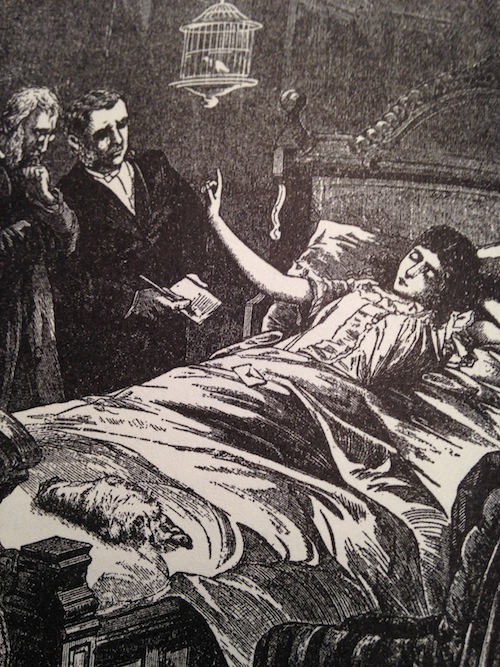 My discovery of the Brooklyn Enigma was a mistake.

On one of my recent research trips to Green-Wood Cemetery, I was scouting graves and stories for my upcoming tour, Murder and Mayhem, Scandal and Spiritualism. I was using one of the cemetery-issued tourist maps, the kind you might be familiar with if you’ve ever visited on your own. I always try to steer clear of any points of interest listed on these — I call my tour “Green-Wood Off The Map” — but I rely on them while scouting, marking them up with notes and names and exes, like strange treasure maps. I have dozens of the little green things in my office, and on this particular day I must have grabbed one that was very old indeed, because I noticed something unusual on it, something I’d never seen on any of the more recent maps.* In one section of the cemetery was the grave of a person identified merely as “THE BROOKLYN ENIGMA.” And that’s how I stumbled on the story of Mollie Fancher, the fasting girl, also known as the Brooklyn Enigma:

“In 1864, sixteen-year-old Mollie Fancher was thrown from a horse while riding in Prospect Park, and her head struck against the pavement. Thereafter she was subject to fainting spells and violent headaches. A year later, on June 8th, 1865, she was dragged a block on the Fulton Street trolley car, which she had attempted to leave while it was still in motion. Her spine was injured, and her nervous system completely deranged. She was able to be about, though ill, until February 3rd, 1866. On the morning of that day… she suddenly shrieked, stood on her toes, and spun around like a top. Then she bent forward, clasped her feet in both hands, and began rolling about the kitchen floor like a hoop. She was carried to her bed, and didn’t leave it for fifty years and eight days, until she died, on February 11, 1916.” (Herbert Asbury, All Around The Town)

While spending fifty years in bed is an enviable enough feat in itself, Mollie’s story only gets even more interesting. While confined to her bed, Mollie developed highly sensitive psychical powers, and her “supernatural powers, clairvoyant gifts, and uncanny exploits” made her home on Gates Avenue a tourist attraction. 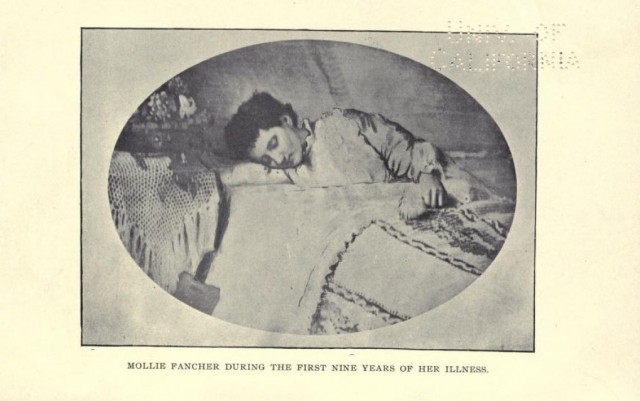 Baffling physicians, astounding spectators, and providing newspapermen with endless fodder, Mollie Fancher grew so famous that P.T. Barnum reportedly begged her to tour with him under his management (despite his offer of a swans-down mattress and gold plated bed, she refused). Some of her remarkable feats included finding mislaid articles, describing the “dress and doings” of friends and relatives fifty miles away, predicting thunderstorms several hours before they happened, and reading the contents and letters of unopened books merely by running her hands over them. She could also identify callers at the door before they entered the house. Some attributed her clairvoyant powers to repeated conversations with the dead, or with angels, and some claimed she had been to heaven and back several times.

Throughout her illness, Mollie went in and out of trances, some of which lasted only a few hours, some which continued for days, weeks, and even months. The longest trance lasted nine years:

“Throughout the nine years her eyes remained closed, and for six years her body was cold and rigid, there was no evidence of respiration, her physicians could detect only a slight pulse, and she never spoke. Occasionally she was fed by force, but for some months at a time she was given no nourishment except a little water. During the last three years of the long trance, Miss Fancher’s body relaxed to some extent, she spoke once in a while, and she was able to move her left arm with considerable freedom. In that time, she wrote 6,500 letters, a score of poems and lyric prayers [and] made a satin waist and pleated lining for her coffin,” among other feats, including crocheting and making wax flowers. (Herbert Asbury, All Around The Town)

So somehow, Mollie Fancher managed to be more productive during a prolonged trance than I have been… pretty much ever.

Three years after she woke up from her nine-year trance, she also developed five distinct personalities called Idol, Sunbeam, Ruby, Pearl, and Rosebud. My personal favorite of these is Ruby, who is described as being, “dashing and vivacious, even hoydenish, and very gifted in repartee.”

By 1894, her health was on the mend, and the public had moved on to newer and fresher sensations. She was thereafter, “nothing more than a bedridden old woman with a passion for fancy embroidery and crocheting.” (Herbert Asbury, All Around The Town)

One aspect of Mollie which Asbury’s somewhat hilarious account glosses over is the idea of “the fasting girl.” Fasting girls were a Victorian phenomena of girls who survived on little to no food and claimed to have spiritual or mystical powers. In Fasting Girls: The History of Anorexia Nervosa, Joan Jacobs Brumberg ascribes much of their claims to fraud, “hysteria” (in 19th century parlance) or anorexia. These girls may have seen themselves as spiritual mystics in the vein of Catholic saints like Catherine of Siena. In one case, that of Sarah Jacob of Wales, these girls literally starved themselves to death (her parents were later convicted of manslaughter). Others were exposed as frauds. While Mollie Fancher was never proven conclusively to be a fraud, neither were any of her claims of culinary abstinence ever proven definitively.

Whether fraud, anorexic, or just plain crazy, there is no doubt that Mollie Fancher was a fascinating Brooklynite, one who reminds us of a time when people were keenly interested in the spiritual and mystical, and were ready to believe than an ordinary teenage girl from Gates Avenue may have visited heaven and returned several times over. I’ll be exploring the darker and stranger sides of life in Victorian New York in this Sunday’s Murder and Mayhem, Scandal and Spiritualism tour of Green-Wood Cemetery, where you too can see Mollie’s final resting place. You can buy tickets to the tour here, and if you can’t make it this Sunday, I’ll be running it the first Sunday of every month through November 2014.

* Incidentally, though I can’t tell you exactly when they updated this map, I can tell you that it didn’t have Basquiat labeled on it. I don’t ever remember visiting the cemetery in a pre-Basquiat era, nor do I recall how or when I got this map, or ever seeing it before. Which is all part, I suppose, of the enigma.