Darkly: An Interview with Leila Taylor 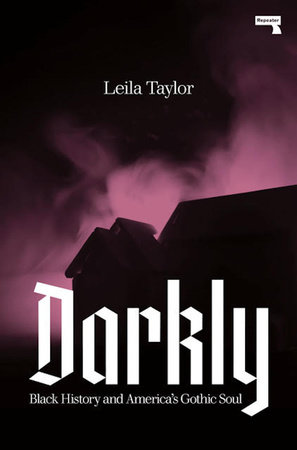 One of our favorite books we read this year was Leila Taylor’s Darkly: Black History and America’s Gothic Soul. We were lucky enough to be able to speak with Leila (over email because social distancing) about her book, horror movies, Black history, ghost tours, and whether or not she thinks NYC is haunted. Read on to find out…. and buy her book!

Leila Taylor is a graphic designer and Creative Director at the Brooklyn Public Library. She is also a writer whose work is focused on the gothic, horror, and the aesthetics of romanticized melancholy. She is working on her first book, part memoir, part history, and part cultural critique on Blackness and the American gothic.

Darkly takes readers “into the dark heart of the American gothic, analyzing the ways it relates to race in America in the twenty-first century.”

Boroughs of the Dead: I love the way you tie Black history into horror film criticism in the chapter “American Monster,” especially when you write about dehumanization, and the spookiness of the three-fifths compromise (“the process of dehumanization is a process of monster-making. But monsters have power”). I like that you cite the movie Ganja and Hess, noting how Ganja embraces monsterdom and becomes a vampire. Do you want to say anything else or expand on this?

Leila Taylor: I love the character Ganja so much! She’s gorgeous and glamorous and confident before she ever meets Hess (he has a curse that makes him addicted to Blood). She sees this opportunity for freedom, and immortality and she goes for it. There’s this moment after she turns when she asks Hess if he’s always cold because she is. He says yes and she asks him, “Well, what do you do about it?” I love that. He has just accepted this curse and gives in at the end. But she questions it, she has doubts, but she goes on. You get the sense that if she’s going to be a monster, she’ll be one in her own way on her terms. She’s both the monster and the final girl. (Ganja and Hess is streaming on Shudder and the Criterion Channel this month; it is also available on DVD and Blu-ray from Kino Lorber)

BOTD: Do you want to share any thoughts on watching Black horror cinema at a time when real life horrors are genuinely frightening?

LT: Horror has always been a way to process fear and anxiety in a space you can control. You can face the horror, go through it and come out the other side an hour and a half later. Especially now when things are so chaotic and frustrating metaphorical horror is kind of comforting. Black people in America have been living in a horror show for generations. That idea isn’t new, but there has been this surge in movies and t.v. telling stories about the Black experience (Lovecraft Country, Get Out) and it’s satisfying seeing your experience and history represented in popular culture. How many people learned about the Tulsa Massacre of 1921 through The Watchmen? It also proves that not only can these stories appeal to everyone but there is an audience for it.

BOTD: You wrote about Candyman, which is a movie I love. How did you learn that Ruth Mae McCoy and the Grace Abbott Houses were the inspiration for this movie? That’s an interesting fact. You note the multiple layers of horror within this story, writing “If the Candyman won’t get you, poverty, systemic racism, indifferent law enforcement, and underfunded services will.” Given that the remake is on the horizon, do you want to talk a little more about this movie and the idea of a midwestern gothic? Is midwestern gothic Black gothic?

LT: I came across an article that mentioned the movie was influenced by true events and that lead me to this article by Steve Bogria in the Chicago Reader called “They Came in Through the Bathroom Mirror” and it broke my heart. I think there are different strains of Midwest Gothic depending on who is telling the story. There’s the idea of something evil underneath a perfect facade, the cracks in the mythology of the American Dream. We see that in horror movies in the suburbs or the New England town in Stephen King stories. But the interesting thing about Candyman or The People Under the Stairs is that they take place in urban environments, in Black neighborhoods and deal with the real economic and social struggle. I have heard that the new Candyman takes on gentrification which is perfect right now. We see that a lot in horror, the invasion of the other (in this case white people) into a community and taking it over. The new Netflix movie Vampires vs The Bronx is all about that.

BOTD: On that note, tell me more about Detroit, and your thoughts on that city as the embodiment of a ghost town, or a horror story? How does that mesh with the reality of growing up there? Do you think a city can be haunted?

LT: There was this misconception of Detroit as a kind of post-apocalyptic ghost town that became popularized in the early 2000s, but it was never an accurate depiction. Ruin porn became really popular and Detroit was the star for a while. But what that does is ignore the fact that there are people still there working and living and making it better. It romanticizes real economic struggle and ignores the good things. Detroit has seen a big revival in the past 10 years or so. I think there is something attractive about the idea of a ghost town, of a city frozen in time, there something alluring about seeing what a place would be like when it’s abandoned by people. For me, there was always something eerie about Detroit, but through the lens of a kid. I’d look at an abandoned mansion and imagine vampires lived there. I wasn’t thinking about the declining economy that got it that way.

Also, I think all cities in America are haunted. As soon as the colonists from Europe landed and began killing Native Americans, America has been haunted.

BOTD: You also mentioned the film Dark Water, which takes place on Roosevelt Island. We give a tour of the Smallpox Ruins and other “dark” (there’s that word again!) sites on the island.

LT: I’ve been on that tour! I think the biggest difference [between Roosevelt Island and Detroit] is that the Smallpox Hospital really is a ruin. It’s not in use, no one lives or works there. No one is being erased. Maybe another example would be Centralia. Silent Hill is inspired by that town.

BOTD: You write, “One of my favorite explanations for the existence of ghosts is the trace” and talk about the Hiroshima-level, atomic levels, of anger and pain that could leave a ghostly imprint on a place. That’s one of my favorite ghost theories too (I use the term residual haunt a lot). Do you think it could apply to New York? Does our city have a trace?

LT: Absolutely. The history of NYC is too deep and massive not to! I get a sense of it most in the financial district. The oldest events and traumas (and some big new ones) are down there. It’s where history feels the most palpable for me. I’ve been on your FiDi tour too and you can definitely feel the past down there. I would say New Orleans is like that as well where you feel like the past and the present has flattened, that you’re experiencing both at the same time.

BOTD: I love that you consider Green-Wood Cemetery your Central Park. I do too! You quote Thomas Laqueur in this chapter, saying, “bodies matter. Personhood persists where it manifestly no longer resides.” What are your thoughts on this in relation to the way Black bodies are buried and forgotten in New York City, and the way their remains are treated upon (usually accidental) excavation? (African Burial Ground, Woman in the Iron Coffin, etc.) Especially as it relates to your (correct) assertion that “The new world was built up, on top, and around the dead.”

LT: Every time a burial site is uncovered it reveals more of how much of our past gets buried, literally and figuratively. Cemeteries, gravestones, they mark the place of a person and individual. But when these African burial sites are uncovered are anonymous, they become markers for a people, in this case enslaved people and become memorial sites for a whole community. They become markers of the institution of slavery not each individual enslaved person. It’s like the Tomb of the Unknown Soldier. I remember when I first saw the New Lots Reformed Church and Cemetery. It was built in 1823. Each tombstone is a designated space with a name for who was under there. It’s old and charming and this slice of history in the city that’s visible. But across the street they found an African Burial ground it’s marked by a street sign. It becomes part of the infrastructure of the city. It’s a historical marker more than a personal one. But in a way it’s this symbol of the people who built this country. We’re literally in the foundation. They’re reminders of how many people were killed that we’ll never know. Then you can’t help but wonder how many others are underneath.

BOTD: Finally… ghost tours! I loved your opening anecdote about taking a New Orleans ghost tour and being the only person who was not disappointed when your guide snuck a bunch of history on to the tour! “As the tour guide understood, America’s haunted history is Black history.” Yes!

LT: That was hilarious. There are so many ghost tours in New Orleans run by various companies and I just love how this guide said, I’m going to tell it the way it is! I doubt any of those folks would have gone on Black History tour, but he gave it to them. I love ghost tours. It’s a great way to learn about the history of a place, through the folklore and these anecdotes. Sometimes they’re corny, sometimes it’s a bit of a stretch to link the them to the place (like the vampire tour) but this one wasn’t even trying to be fun. He was there to educate! I respect that. But even I’ll admit I would have like to hear some ghost stories!

BOTD: I’m so glad your book exists because I have wanted to parse the use of the word “dark” in this specific context for a long time. We have a tour called “Forgotten Dark Histories of Lower Manhattan” (we’ve held staff meetings to discuss that name) and I subscribe to the “dark tourism” digest. What are your thoughts on “darkness” being commodified to sell ghost tours?

LT: “Darkness” has been shorthand for death, evil, and bad things since the beginning. The literal “let there be light” beginning. Everyone knows what that means when you say something is “dark”. What’s problematic is that when “darkness” and all it implies is applied to people. Biological determinists said the darker you were the less evolved you were. Colonialists called Africa the “dark continent” implying not only a place that’s mysterious and uncivilized, but the people as well. Colorism is a real thing that we still deal with to this day. It’s one of those things that is so deeply engrained in our language, I think it would be difficult to erradicate. Probably as hard to disconnect the word “light” with good. If you Google “dark” and “movie” the list of titles that comes up is insane. But to me “dark” is not the same thing as “black.” It’s clear in this context that dark = spooky, not dark = skin tone.